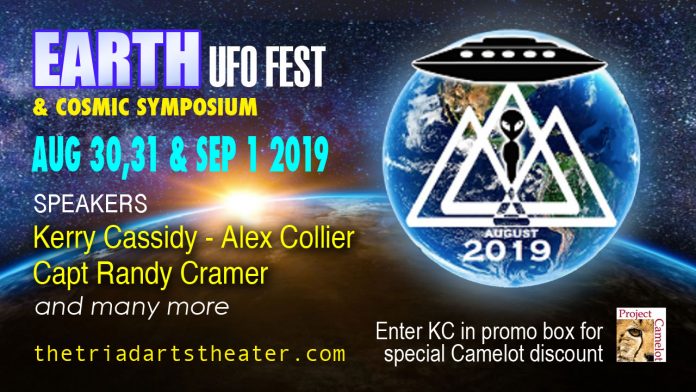 Kerry will be speaking at the YELM EARTH UFO FESTIVAL along with Alex Collier, Randy Cramer, Jo Ann Richards and more…

REMEMBER to put the initials KC in the promo box for a special Project Camelot discount!

This is a fun festival in a great location near Mt. Ranier.  Join Us! 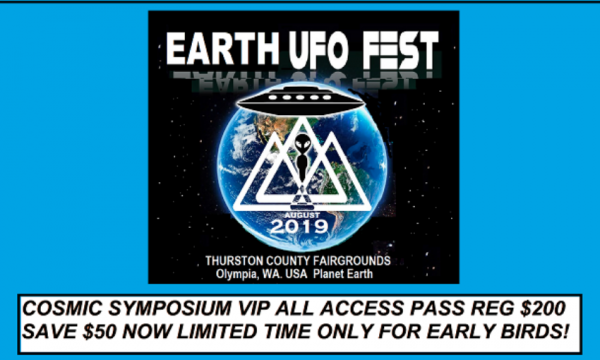 Broadcasting from the Mother-ship to  Earthlings Below,  Yelm’s famous 3rd annual EARTH UFO FESTIVAL and Cosmic Symposium is this Labor Day Weekend  at the Thurston County Fairgrounds… featuring UFO Experts and Celebrities from around the World who will be speaking in the Cosmic Symposium Hall. (This is an  E ticket ride for UFOLOGY enthusiasts and must be purchased separately.)

On the main festival grounds at the Starlight Stage, experience 3 days of LIVE OUT- OF- THIS WORLD ENTERTAINMENT Including  the BEST MUSIC IN PUGET SOUND, FEATURING TOP BANDS LIKE URBAN SHAMAN, RETROJADE, and HURTS LIKE HELL,and special guest star LARRY G JONES Las Vegas famous MAN OF A THOUSAND VOICES along with many more shows from Country Rock Comedy to Opera! This is a buffet of Music to send out to the heavens displaying humanity’s finest quality…ARTISTIC EXPRESSION!
Bring the kids to romp in the HUGE UFO  2 story Bouncy House and climb into a real declassified vintage military aircraft provided by Olympia Flight Museum which is sure to enthrall human children.
Enter the Dark side of the moon and see demonstrations on crystal energy, the power of music, space medicine, and a Cloudbusting machine inspired by Wilhelm Reich!
SEE cutting edge documentaries on the latest in Real footage of Aliens, Free energy systems, Archeological findings on Giant Alien Skulls, and never before seen clips from the International Space Station and Moon landings in the GALAXY THEATER!
ENJOY AN ICE  COLD BREW (you earthlings call Beer) where You can watch a magic show from Neptune – or a mind-boggling mentalist as he bends metal, defying the laws of mainstream science on the ROCKET STAGE by all the lovely variety of food vendors…
The Reptile Man with his family of reptilians will also be performing for your squeamish delight along with earthbound songwriters and poets who will be sporadically performing on the Rocket Stage.
Then at dusk, a real flying Saucer Demo will be flying overhead. Nightly,  a Saturn 5 rocket will launch amidst a Laser light Show
or Search Lights lighting up the sky on the Magnetic Field and the big entertainment begins on the Starlight Stage.
All this and more with the price of a small admission o $7 to adults, human children are free!
For those with insufficient funding…FRIDAY FROM 11am to 4pm is only a buck.
Come One Come All! Wear your favorite Alien Costume and get in free to the festival. Enter our Alien Contest nightly for cash prizes too!
Earthlings remember… You may not believe in us but WE believe in YOU!
FOR COSMIC SYMPOSIUM TICKETS FOR CELEBRITY SPEAKERS ON TOPICS YOU WILL NEVER LEARN ABOUT IN OUTDATED SCIENCE TEXTBOOKS….
FOR TICKETS GO TO EARTHUFOFEST.com or Facebook or call 785 4ALIENS ( 785 425-4367) 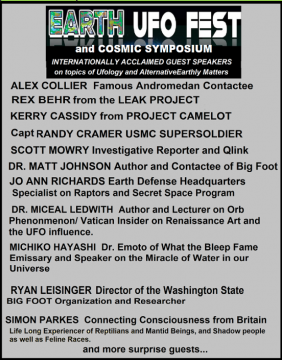 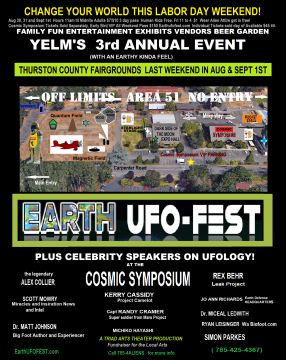