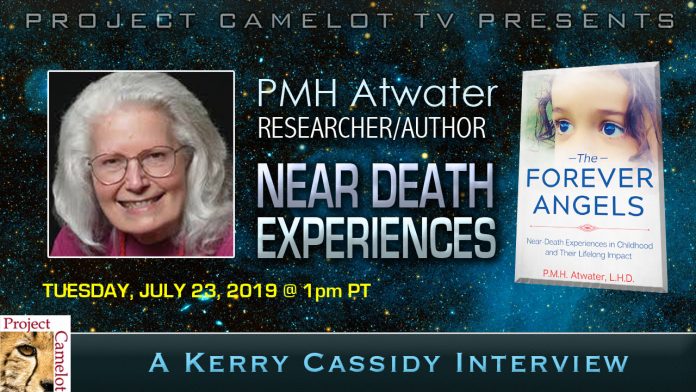 She has a new book coming out in September called FOREVER ANGELS and has written about the emergence of children who will assist with changing consciousness on Earth.

See her bio below…

P. M. H. Atwater, L.H.D. is one of the original researchers in the field of near-death studies, having begun her work in 1978. She has written eighteen books on the subject. “Near-Death Experiences: The Rest of the Story” wraps up her early work with over 4,000 adult and child experiencers of near-death states, while further exploring her theory about transformations of consciousness, a theory she first began to investigate in 1966 back in her home state of Idaho.  Some of her findings in the near-death field have been verified in clinical studies, among them the prospective study done in Holland and published in Lancet Medical Journal, 12-15-01.  Her “The Big Book of Near-Death Experiences,” brought the entire field of near-death studies up-to-date worldwide, and was featured in an online version of Newsweek Magazine; her “The New Children and Near-States States” along with “The Forever Angels:  Near-Death Experiences in Childhood and Their Lifelong Impact” turns around what we thought we knew about child experiencers.  “Dying to Know You:  Proof of God in the Near-Death Experience” stands alone as a summary of thousands of experiencer voices – their words, their truth, their wisdom:  “the people’s book.”

In 2005, she was awarded the Outstanding Service Award from the International Association For Near-Death Studies (IANDS), and the Lifetime Achievement Award from the National Association of Transpersonal Hypnotherapists (NATH), as well as an honorary Ph.D. from a school in Sri Lanka.  In 2010, she was also awarded the Nancy E. Bush Award for Literary Excellence and the Lifetime Achievement and Special Services Award, both from IANDS.  She has presented her findings for many organizations and schools, including twice at the United Nations, and as a guest on such TV shows as Geraldo, Regis and Kathie Lee, Larry King Live, Sally Jessy Raphael, and Entertainment Tonight.  She has been a guest on hundreds of radio shows, including several with George Noory, and one with Art Bell.  Her books have been published in over 12 countries.  In April 2018, she won the 2017 Silver Nautilus Award in honor of her recent book “A Manual for Developing Humans” – for offering a potent and powerful message for today’s world.

A generational researcher as well, she summarized the changes now occurring in the human race in “Children of the Fifth World:  A Guide to the Coming Changes in Human Consciousness,” and “Beyond the Indigo Children.”   Her own story as an experiencer of near-death states – I Died Three Times in 1977 – The Complete Story – is available at Amazon.com.  She became a researcher in the field of near-death studies because of what she was told to do during her third NDE, by a voice she came to call The Voice Like None Other.  That Voice also told her to write three specific books.  The first was not named (could have been “Coming Back to Life”), the second is “Future Memory,” the third “A Manual for Developing Humans” (which recently won the Silver Nautilus Award).  A prayer chaplin, visionary counselor, wife, mother, grandmother, great-grandmother, her website is filled with many services and features, among them The Marketplace – where near-death experiencers and those like them can promote their products and services without  charge  Her monthly newsletters are free – sign up at www.pmhatwater.com.