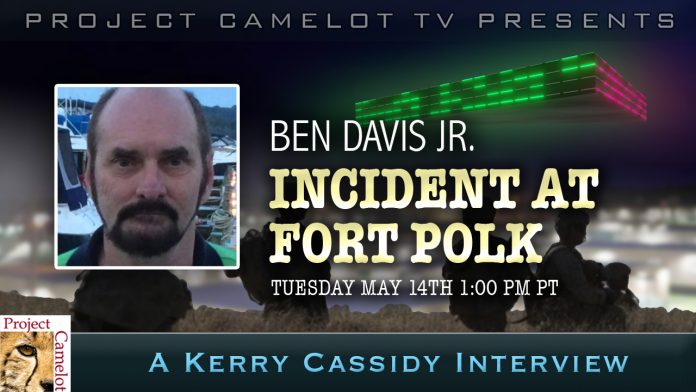 Ben Davis Jr. tells the story behind his abduction while serving in the U.S. Army at Fort Polk and how the ETs got him to steal and bury a DEW (DIRECTED ENERGY WEAPON).   We had lots of interference from Grey ETs and agencies on this one.  Edited for sound.

See bio and links below.

Ben’s bio and links:
I graduated from Leon High School from the Class of 1973, Leon High School, Tallahassee, Florida, in the top 3% of the Class. We were 1972, Class 4A State Football Championship team and still hold the State record for least amount of points scored in a season (88 points). I enlisted into the US Army on November 26, 1974 as a 12B Combat Engineer, with extra Training in a booby trap and mine warfare.
I am the author of 4 books. “It’s About Time: Incident at Fort Polk”.. “The Pink Mile”.. “TI vs AI:Targeted Individual versus Artificial Intelligence”.. and.. “Dear Mr President: A Soldiers Plea” as I accomplished this with a BFA degree for Creative Writing in Entertainment (2010-2012) with a 3.88 GPA.. I am a researcher since I was 7 years old and still continue doing research today.
RELATED LINKS AND BEN’S BOOKS:
Data Asylum website
dataasylum.com/
dataasylum.com/targeted-individuals-cure.html
It’s About Time: Incident at Fort Polk (I added twice as much content in this book than first edition)
www.amazon.com/Its-About-TIME-Incident-Fort/dp/1478265469/
TI vs AI: Targeted Individual versus Artificial Intelligence
www.amazon.com/Targeted-Individual-versus-Artificial-Intelligence/dp/1976949831/

One of my sources that led to my books… The Carnicom Institute.. I suggest you listen to this video if you have time www.youtube.com/watch?v=m-3GSmW7944

It covers GeoEngineering & BioEngineering
This link explains in high detail what the Science/neurology people have known since 2007
simplisticart.blogspot.com/2007/01/here-we-go-on-reiteration-of-glorious.html
I go into the details of the Patents behind the knowledge of it all. Trump had a secret MEMO put out that allowed the secret Patents to be let out for the public to see when he first went into office.
Social Network Patent – FB, Twitter, and YT chat all use this PatentSocial network driven indexing system for instantly clustering people with concurrent focus on same topic into on-topic chat rooms and/or for generating on-topic search results tailored to user preferences regarding topic

FN/TRAC system FAA upgrades for accountable remote and robotics control to stop the unauthorized use of aircraft and to improve equipment management and public safety in transportation (HRC’s Law Firm owns this Patent.. Kline & Walker LLC)

dataasylum.com Website that I studied for now 9 years and got permission from the owner to use the content.
Go here to see my prior interview with Ben Davis Jr. from a few months ago:
www.youtube.com/watch?v=jaFKPgjOV_0