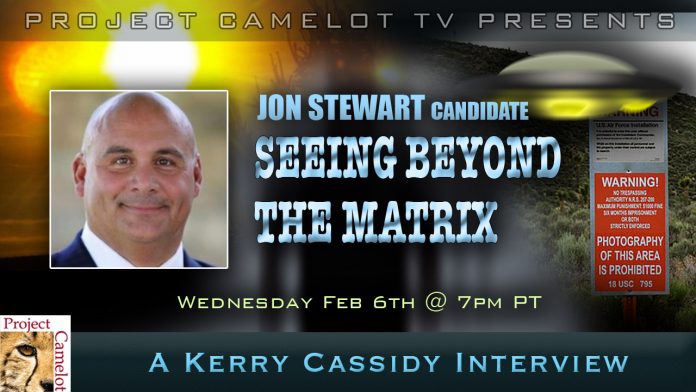 I talk with Jon Stewart, who recently ran for governor of Illinois.  He has an interest in the paranormal and world beyond the superficial world of the mainstream.
7pm PT Wednesday, Feb 6th.
Bio:    Jon Stewart, 52 years old, is a former professional wrestler and candidate for both the United States House of Representatives and most recently a Libertarian candidate for Illinois Governor.  SEE BELOW FOR MORE…AND A LIST OF TOPICS
BIO:   Jon has competed with American Wrestling Association on ESPN from 1988 to 1991 and became the companies World Heavyweight Champion in 1996.
His first foray into politics was a bid for the Illinois House of Representatives and his campaign consultant was none other than President Donald’s Trumps legal counsel, Kellyanne Conway.
Due to the Jesse Ventura Governor win, his run for US Congress in 1999, was covered by the national media like the OReilly Factor, Hannity and Colmbs, CNN and even a feature story in the New York Times.
He has been seen on FOX News and MSNBC and CNN as a political al pundit and whenever major news in the wrestling industry is in the headlines.
Despite his 30 years wrestling career, he is most known for being mistaken for the Comedy Central Jon Stewart. In a story that made national news for three days, a charter school in Utah mistakenly hired the wrestler to appear at a gala event while thinking they had hired the comedian Jon Stewart.
He currently runs his families automobile dealership, has produce two reality show pilots and continues to be involved in the Libertarian Party.
He resides on the North Shore of Chicago and has been married for twenty years to his wife Joann and the couple has three children.
TOPICS that Jon is willing to speak on and has information, personal experience or has researched…..

“I don’t want to burst the conspiracy balloon but simply turn everyone’s attention a few degrees to focus on the bigger picture and facts”.  Jon’s Political Journey and what it has taught him about govt.  Politicians/cover your ass/thinking long term for why conspiracies get born out of the govt trying to operate for the greater good (Rex 84 Program),

3. The 1988 vision of himself running for Governor of IL

Conspiracies that Jon has researched and has an interesting redirect on

7. Aliens vs The Bible (the Cosmic Key to Prophecy)

(Three reasons why it is real based on extensive research)

8. Why Phillip Corso is legit

9. The Sky Booms and Jon being the first person to notify the police (according to L. Howe)

Jon’s statement about his hopes for humanity, governments and the people of our planet)

Jon has spoken or communicated with the following people on his experiences: