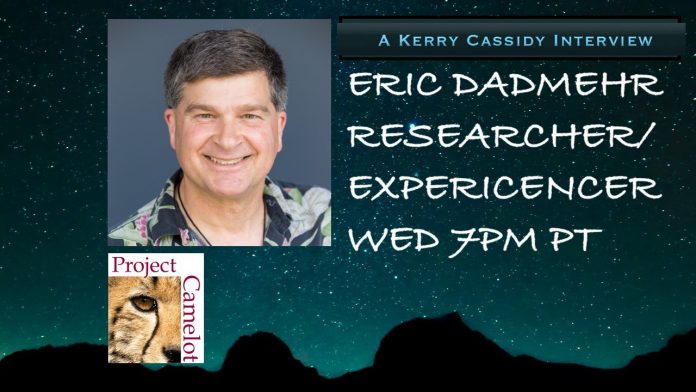 ERIC DADMEHR – psychic, experiencer and researcher soon to be the Host of the stargatetothecosmos.org conference OCTOBER 24-28th, is my guest. The conference is being held in Albuquerque New Mexico.

Eric is a very smart guy and we ended up talking about Flat Earth, Fukushima, Fema Camps, MILAB, Montauk and the many top celebs and famous UFO speakers such as Phil Schneider and Richard Hoagland.  He also met and talked with Stanley Kubrick who told him why he produced the Moon footage!

…Short bio from Eric:   “I am a public speaker educating the public about how Fukushima was weaponized, how we have a patent on Ebola ( US Patent # CA 2741523 A1, and the cure is colloidal silver by the way), and the Rockefellers own the Zika Virus since 1947 atcc.org/Products/All/VR-84.aspx#history, other major health issues like GMOs, fake global warming to sell carbon credits, Planet X, chem-trails (barium, strontium, and nano aluminum), fracking causing earthquakes, selling our public parks, and the drought we created on purpose to change laws about water (so they are attacking our water and food to control us for corporate greed) and 9-11. Why is it illegal to fight cancer in any other way besides Chemotherapy, Radiation, or Surgery in America? America owns the US Patent Cure for all Cancers # 6630507 Cannabis Oil! Valiant Thor came from Venus (actually the Pleiades) in 1957 (really he came here even earlier) and stayed for three years at the Pentagon given VIP Access and then gave us all the answers to our world problems, free energy, cures to all diseases and old age but the heads of CIA and Military vetoed President Eisenhower and Vice Nixon because they said it would ruin our economy! Valiant Thor replied if you don’t take this information, you will ruin your economy! And that’s where we are today! Watch the new movie based on this true story called, “Stranger at the Pentagon!” I will be speaking about “The Mandela Effect,” False Flag Events from 9-11 to Las Vegas Babylon, and Flat Earth Proofs (Operation Fishbowl Firmament Dome). Check out this warning from the Annunaki (our parents that manipulated our DNA).”

RYUSHIN: THE ORION LINES: NAZCA AND THE ET LINEAGES