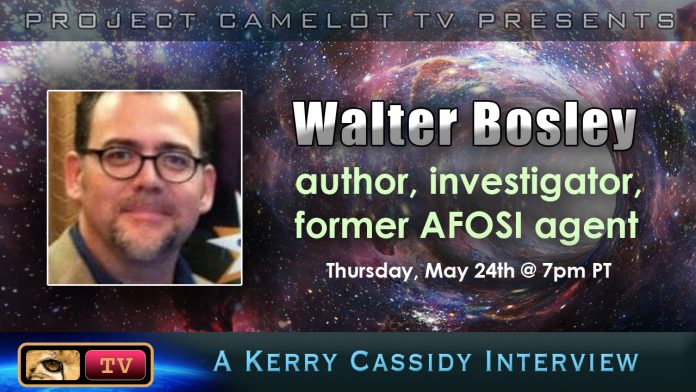 WALTER BOSLEY – was my guest. He is an author/investigator of occult mysteries and former AFOSI agent.

Investigator of historical occult mysteries, author of pulp fiction novels and a screenwriter who has appeared on History Channel’s ‘Ancient Aliens’.

Walter Bosley was born in San Diego, California, and attended SDSU where he earned a B.A. in Journalism. He has been employed by the Federal Bureau of Investigation, is an inactive reserve officer in the US Air Force for which he served as a Special Agent of the AFOSI while on active duty, and then worked as a counterterrorism operational consultant for six years following military service.

Bosley spends his time writing fiction and non-fiction, as well as investigating strange mysteries, in between PI assignments. The latest news about Bosley’s projects can be found at the following blogs: empireofthewheel.blogspot.com & lostcontinentlibrary.blogspot.com

Also see my prior interview with Walter Bosley here: