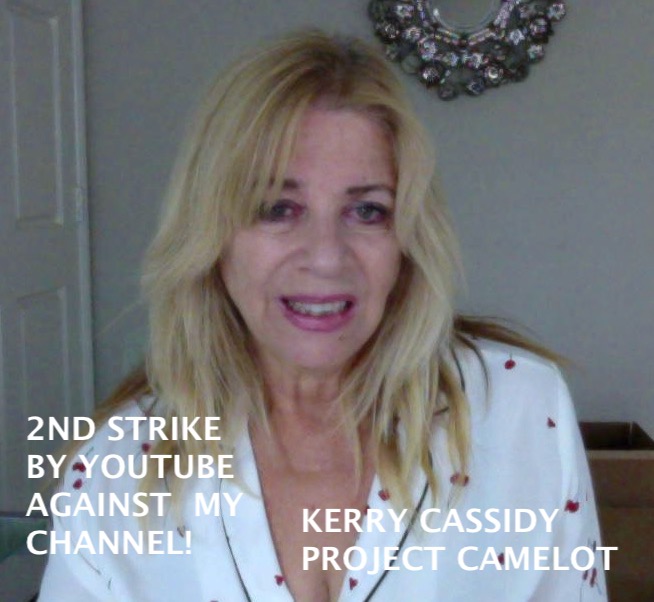 LETTER TO A GOOD LAWYER:  (feel free to copy and distribute)

To whom it may concern:  I am in the process of looking for an attorney to represent me pro bono in a case against Youtube and/or Google for what I believe is an illegal 3-strikes LAW on their youtube website as well as illegal targeting by Youtube/Google in conjunction with advertisers against our rights of free speech and freedom of the press of independent broadcast journalists and their channels.

So far I have recently been given 2 strikes on my very large Youtube Channel where I have over 197,000 subscribers and over 57 million unique viewers worldwide.  I am a Youtube Director (from the early days) and Youtube Partner (as they call it).

I broadcast a weekly live show on Youtube which then goes into my youtube videos which are available indefinitely to viewers from then on.  I am authorized to “monetize” my videos and have been earning the main portion of my income from the ad revenue gained there for at least 5 years.   So this threat to delete my videos constitutes a threat against my right as a Broadcast journalist to interview anyone I choose to investigate things like terrorism, government sponsored as well as attacks on America such as 911 and shootings as well as political events that are mainstream news.  I also specialize in whistleblower testimony regarding the deep state and secret space program among other things.

Youtube is now demonetizing as “inappropriate for advertisers” videos of mine which cover topics as wide as Giza, Egypt and the pyramids, financial interviews, school shootings and military witnesses who I have interviewed on political topics.

I am not the only alternative broadcast journalist and blogger who they are doing this to…. I believe we have grounds for a CLASS ACTION against Youtube/Google for this change in policies.  They have gone back retroactively in to my library and marked as “inappropriate for most advertisers” videos that go back to 2007 and 2008!  Videos that have gotten as many as 400,000+ views and so on.

Go here for more info:  See my update regarding the 2nd strike by Youtube against my main Project Camelot Channel.  Answers to inquiries on the status of our channel.

Please let me know if you know of any attorneys that would be interested in handling my case.  At the very least this is something newsworthy.

Because my channel has over 600 video interviews and Youtube’s web bot or AI is going back in time and scanning my videos on a daily basis I am literally waiting with a gun aimed at my head because if I receive an arbitrary 3rd strike, my channel will be deleted!  This channel represents over 12 years of investigative journalism and documentary filmmaking and is my livelihood.

Thanks for any help you can provide.

SEE UPDATE BELOW THE VIDEO.

MY ALT BACKUP YOUTUBE CHANNEL for BROADCASTING LIVE and upload new videos to..please SUBSCRIBE to help Camelot survive!  PCTV Network LLC Youtube Channel (this channel has no “strikes” against it.

In this video I explain what happened surrounding Youtube going back in my list of videos and suddenly deciding to delete a video interview with Dr. James Fetzer regarding Parkland, which gave my youtube 2 strikes.  One more strike and they delete the channel.

At the time of this writing I have 196,000+ subscribers and over 58 million viewers worldwide.   We have been operating for over 12 years.  There are 3 of us, me, my webmaster and my cameraman/designer who makes the banners advertising the shows.  We rely on the advertising revenue from the channel to keep us alive (and some donations from the generous public).  However donations are not enough to keep us going.

Some are asking how they can help us.  I wrote the following to a friend and I am reposting it below to answer that question.  Thank you for your support of Project Camelot.

Watch the video and see below.

HOW YOU CAN HELP:

Not sure anyone can help. We have gone through and demonetized the “inappropriate for advertisers” videos which were all tagged recently after years of being fine. We also marked private videos where I interviewed Fetzer or Ole Dammegard. What we have seen is it is not only interviews about False Flags they are targeting but others totally unrelated such as about Egypt or Ben Fulford or other totally unrelated content. So there is no clear reason why they are doing this.

However I do think tagging as “inappropriate for advertising” is the new way they detect videos they may want to give me a strike over. What I need is a lawyer who will sue youtube pro bono in a class action. Otherwise we sit and wait to see what they do next.

I am told it’s actually not the videos at all in my case but a very high level financial source i am in contact with and the publishing of the white hats report months ago about high yield trading programs that is the real reason. If they want to take my channel down they will and aside from legal action I have no recourse. We have backups of all videos and are making preparations to find another place for them. But if I lose the channel I lose my financial foundation and will have to get a job. Which I don’t mind I guess… Amassing the size of audience we have took years… it won’t happen again most likely. Thanks for your interest. And thanks again for supporting Project Camelot through the years. 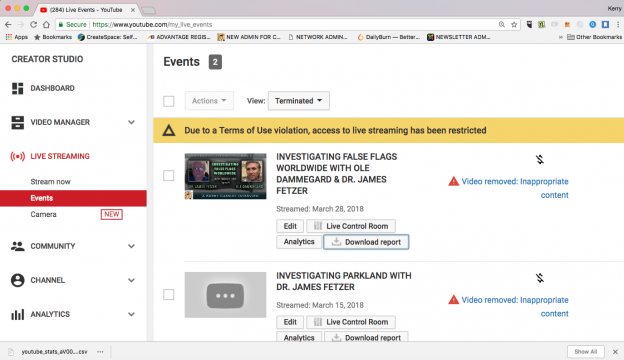