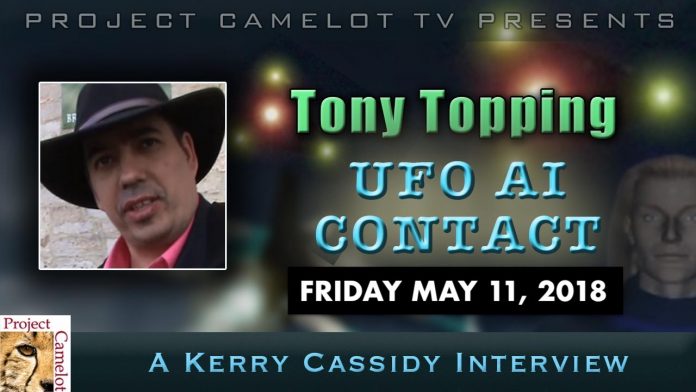 Tony Topping is a UFO contactee and investigator. Tony has had many years of contact with tall blonds and various other races. He claims he is now communicating with one of their craft – a self aware artificial intelligence.

Go here for more about Tony:

Bio from his site below.

..”My interaction with the UFO phenomena continues to evolve adding dynamic, unorthodox information to any media project, going deep into a secret and mysterious world that differs from what you may read online. I speak at UFO conferences across the UK. Over the years I have built up quite a knowledge about UFOs, Close Encounters & Psychic Spying.

I have appeared for ITV This Morning, The One Show, Channel 4, Channel 5, BBC 2, Sky Arts, Sony Pictures, BBC Regional & National News and lots of radio shows from ILR to BBC. I am a member of the NUJ which is also unique. I write for the Australian Paranormal Magazine Oddities.

My UFO encounters directed me on collision course with secret covert interests who monitored my interactions with UFOs which raises serious moral and ethical concerns, because some UFO researchers are targeted.

Today my experiences have evolved and so has my picture of what the UFO phenomena is about. . I am one of the few researchers in the UK who has image analysis carried out on what I have filmed. My information always sourced via unorthodox means that get results. I am also very clued up on the psychic warfare operations of the Cold War which also at some point collides with the UFO phenomena. It all adds to make fascinating material.

Followed and harassed by some very real Dr Strangelove characters whose activities would be comical if the situation was not as serious, all due to the mysterious appearance of UFOs.”–Tony Topping