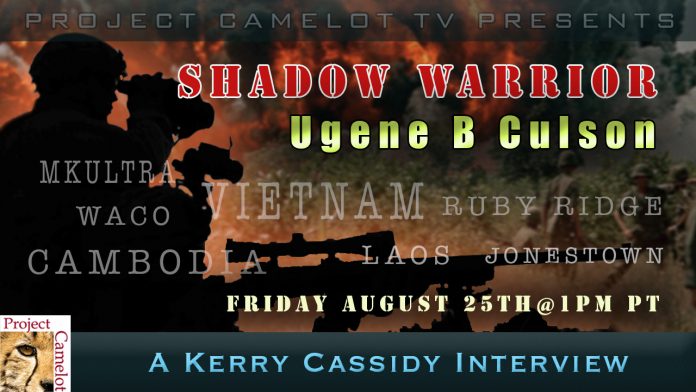 I interview an original MKUltra Super Soldier Shadow Warrior involved in 444 operations including; Vietnam, Cambodia, Laos, Waco, Jonestown, Alice in Wonderland, Aurora Project and more.  “Culson” is one of his names used for ops.

BIO in his own words (spelling not corrected):

“I’m 60 years old.  At age 5, I was put in the program and trained by a ranger who was the first guy to go out with knief all nite long in the Korean war who was the baddest of the bad, I was recently told this guy also helped train Chuck Norris.  I was told my first combat mission was at age 12 in Vietnam. I think I was a tunnel eat I have a little memory Of this. The first complete combat mission I fully remember is ” Alice in wonderland ” in Laos 1972 I think in November. after “the bunker hill action 12 23 73 near dmz Vietnam I was tabed  delta force first team asset. After the myegez rescue in Cambodia I was tabbed for udt seal recruit training class 99 in 1976 stating phase 2. I never did basic training I was trained 1 on 1. My initial jump training was advanced condensed jump training at ft Campbell ky between Christmas and New year’s in 1975, I was the only one in the class. I was married in 80, my marriage was a set up my ex wife was my mind control keeper .my work was in construction. I’ve been told I did 444 major covert missions not including the small stuff.i would dream of combat all my life ,and have flashbacks of combat and I wondered with these dreams and flashbacks came from. in 1996 I heard Kathy Obrien speak and I met her and bought her book ” transformation of America ” about mind control, I couldn’t put the book down. in 1996 I heard David John oats speak on reverse speech and I bought a reverse speech tape machine and learned how to use it, I realized my family were victims of MKULTRA by this method. i met ted Gunderson and sue ford who is a victim and she wrote the mind control book” thanks for the memories” in April of 2000 , right before finding about my exes connection she left me and made life a living he’ll!  I put myself in hypnosis therapy to recover repressed memory. when I had flashbacks of satanic ritual abuse,  I called sue ford,  she said she recognised me as a mind control victim when we met.1 week later I started remembering military shit. 15 years ago I spoke the top deprogramming shrinks in the nation they all said i had the most detailed recovered repressed memory of any surrvivor and that was 15 years ago I’m way beyond that now. I am not regular military but I was a delta force, seal ,Marine, ranger,green beret, and air force asset. the only reason I’m alive today is God above. the perps have done horrible things to me and my children, made my life a living he’ll and tried to kill me hundreds of times, but as I said God protected me, I am not superman but because God  protected me I was invincible in combat and everybody knows this that’s why I was always in the most dangerous portions of battles.”– Ugene B Culson