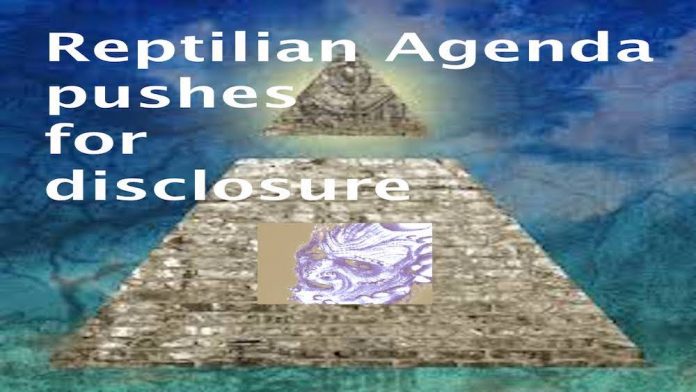 About a year ago my witness Captain Mark Richards said that the Reptoids (reptilian-human hybrids) were trying to push disclosure. He cited a battle in Mosul that was the Reptoids forcing the issue and coming to the surface to reveal their presence.  Here is what he said:

re:  SYRIA— AND MOSUL – testimony of Mark Richards per Kerry Cassidy’s recall, Nov 2016

“Syria contains Reptoid bases that is why both U.S. And Russia are bombing the hell out of Aleppo.

He says MOSUL IS KEY… The Reptoids are building something there that would force disclosure (of their presence) and the US is determined to stop them.

They want to reveal their presence to create Chaos in the world.  They believe humans will go crazy and rebel against their masters if they find out what’s really going on here on Earth.

The Reptoids believe that will assist them in their efforts to take over the planet.”

What appears to be happening is we have a formation of disclosure teams being backed by various factions within the Deep State/ Military Industrial Complex known as the Secret Government / Secret Space Program.

Many in this sector are missing the forest for the trees and like GRANT CAMERON in his recent interview still thinks the President of the U.S. is in charge of disclosure when he is simply a front man hired by a portion of the elite.

In the above video linked to Grant Cameron he states a source told him “something changed in 2016”.  Add that to Mark Richards statement above in 2016 about Mosul, Syria where a major battle took place.  Mark has long emphasized the war in the Middle East are wars with ETs and we are part of it.

Major sources of mine have stated that there is a fight over who handles disclosure and of course over the method.  I was told the Vatican is strongly vying to be in charge.  Knowing the Black Pope controls the Vatican and the Vatican is controlled by the Reptilians (see my interview from years ago with Leo Zagami, member of the P2 Lodge for more on this).

There is a clear break up and realignment happening within the Truth Movement which includes the whole ufo/disclosure movement.  Sides are being taken.  Past friendships and agreements are being trashed and new alignments are forming.

In the same interview V with Mark Richards he said we are fast approaching what he called the beginning of 10 years of Earth Changes.  This soft disclosure is all part of it.  Years ago our witness Arthur Neumann /aka Henry Deacon stated that they would take down the financial system, orchestrate escalating wars, and do disclosure all around the time of Earth Changes in order to confuse and keep the attention off those responsible for the deception and secrecy for so long.

As the number of factions and splintering increases within the community (and lies and disinfo from various sides proliferate) I suggest we keep the higher goals in mind.

There is of course much more to this story…