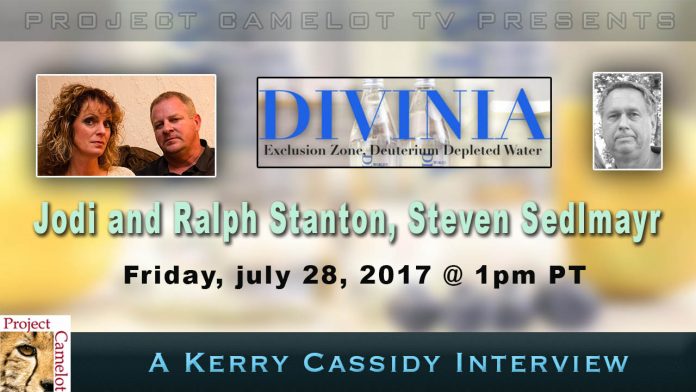 I will be interviewing Kiersten and Steven Sedlmayr with special guests Ralph and Jodi Stanton.  In 2011 Ralph was exposed to an uncontrolled release of plutonium while working on-site at Idaho National Labs.  This is a story about how Divinia Water has helped him to regain his health.  See bio(s) below.

Steven Sedlmayr has over 20 patents to his name, founded over 5 companies, and was the youngest recipient of the National Science Foundation Grant when he received it at the age of 16. Martin Marietta, NASA, and the Colorado School of Mines are some of the larger institutions he has worked for. Mr. Sedlmayr is a prominent inventor who invented the fiber optic television, which is known as the predecessor to high-definition television. Under the mentorship of Dr. Rostrum Roy at Arizona State and Penn State, Sedlmayr has perfected the state of water with his latest, patented invention. Sedlmayr’s water was researched by colleague Dr. Gerald Pollack, who concluded Sedlmayr’s water to have the highest EZ water signature he has seen; Sedlmayr’s water is also highly energetic, deuterium depleted, and oxygenated at 102%. He currently resides in Idaho with his wife.

Ralph is a veteran of the United States Air Force and served in the Gulf War conflict in 1990. In 2003 Ralph was hired as a security guard for the Idaho National Laboratory, and three years later was trained and hired as a nuclear facility operator for one of INL’s contractors. On November 8th, 2011 Ralph and 16 of his colleagues were exposed to an uncontrolled release of plutonium while working on-site at the INL. After the accident, Ralph faced numerous health issues and legal battles and felt his and his family’s lives were destroyed. Today, Ralph and Jodi share their story and personal discovery, health and recovery after crossing paths with Steven Sedlmayr. Ralph is 52 years old and has been married to his wife, Jodi, for over 29 years. Together, they share 3 kids and 3 grandchildren, and reside in Idaho.