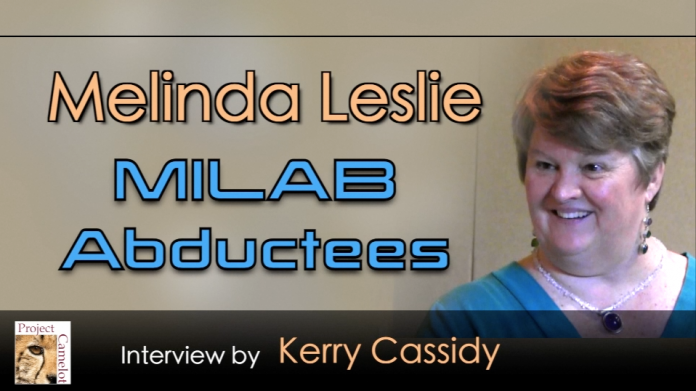 I interview Melinda Leslie at the 2017 UFO Congress. We have a wide ranging discussion about her research, MILAB abductees and ET involvement.

Melinda Leslie is a researcher, investigator and lecturer in the field of ufology. She has been public with her own abduction encounter experiences for over 20 years and has researched covert-ops and military involvement in abductions for nearly the same length of time. She has interviewed over 80 abductees who have experienced MILABs, which involve military appearing personnel who use drug induced interrogations and hypnosis in order to retrieve extraterrestrial related information from alien abductees. Melinda’s research is featured in the book; Camouflage Through Limited Disclosure: Deconstructing a Cover-up of the Extraterrestrial Presence by Randy Koppang.

Melinda Leslie has lectured for numerous organizations including MUFON, The X-Conference, The Bay Area UFO Expo, UFO Expo West, The International UFO Congress, The Whole Life Expo, and others. She has been a guest on numerous popular radio shows including Coast-to-Coast AM, and has appeared on several television shows. For nine years she was the Producer and Director of a UFO lecture series hosting the most prominent names in ufology. In addition to her abduction work, Leslie has been a paranormal researcher for over 25 years and a founding member of the Orange County Paranormal Researchers Group, an organization which conducts formal paranormal investigations.

Melinda Leslie, also known as “The UFO Lady,” co-operates the Center for the New Age in Sedona, Arizona. Among other duties, she hosts UFO Sighting Tours and Tours of Vortexes. Her company also houses a UFO Research Center which holds regular UFO Discussion Groups.    Her Facebook page:  www.facebook.com/melinda.leslie.75