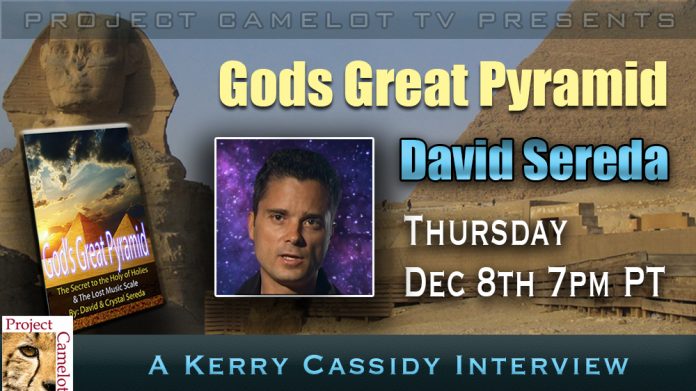 I will be talking with David Sereda about his new ebook: Gods Great Pyramid and the power of crystal technology.

From his Fund Me site: www.gofundme.com/DavidSereda
My name is David Sereda. I have appeared on hundreds of radio shows for 16 years now, from Art Bell, George Noory, Jimmy Church, Shirley McLaine, Alan Handelman, John B. Wells, Dr. J Live, and too many to count. The phone has not stopped ringing for 16 years. I have also appeared on CNN Anderson Cooper, TLC, History Channel, Fox News, Fox TV, and numerous TV networks. Why? What is it that I talk about and have discovered? My education is a self design and self study in various fields from science, religion, philosophy, paranormal, fringe science, fringe physics, and beyond boundaries of traditional education.

I have offered viewpoints that are not bound by educational standards. My films have had millions and millions of free views on youtube by stolen users. These users have changed the name of my films so they can monitize them such as “Quantum Communication ” being changed to Mind Science Kept Hidden, etc. That film of mine has had over 35 million views and it is almost 3 hours long. My other titles include “Evidence, the Case for NASA UFOs,” “Dan Aykroyd Unplugged on UFO,” “THE VOICE,” “Hope for Humanity,” and here is my recently released film on youtube, but made several years ago, Mona Lisa’s Little Secret:

FOR MORE AND TO SUPPORT DAVID’S WORK GO TO: