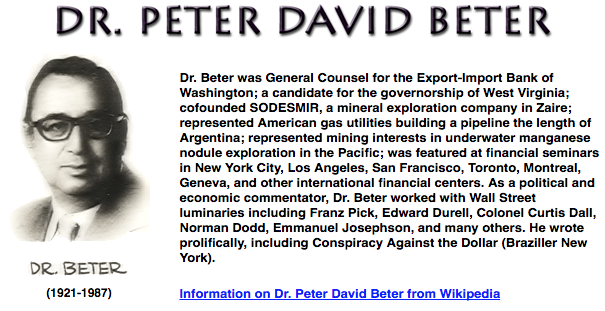 We have known about this excellent witness for a long time.  I am reposting a link to his work for those of you who might be interested.

He is revealing conspiracies of al kinds.

….”But it happened, right on schedule. In the spring of 1974, Dr. Beter
described a sequence of events by which the Watergate Scandal would make Richard
Nixon the first U.S. President in history to resign. At the time, Watergate
seemed to be running out of steam, and Nixon appeared to be “toughing it out.”
Even less believably, Dr. Beter described a secret agreement which he said
existed by which then-Vice President Gerald Ford would nominate Nelson
Rockefeller to be his new Vice President after Nixon resigned. In the spring
of 1974 those things sounded hard to believe indeed. But they took place.

Dr. Beter claimed that events like these, while shocking to the public, were
planned far in advance. He said that they were known within certain
intelligence and even business circles here in America and abroad. Drawing
upon his extensive contacts with these circles, Dr. Beter was making public what
the privileged few already knew.

…” Peter Beter (yes, it rhymes) first came to widespread popular attention
in 1973, through his best-selling nonfiction book, The Conspiracy Against the
Dollar (George Braziller, Inc., N.Y.). It was a gripping tale of international
economic intrigue and monetary manipulation, carried out by the coordinated
action of multinational corporations grown more powerful than many of their host
countries. The objective: to deliberately undermine and ultimately destroy the
United States dollar, as a major tool of political and economic conquest under
the banner of a “new imperialism.” A crescendo of unhappy consequences were to
be expected: an accelerating economic “stagflation” (a now-popular word coined
years ago by Dr. Beter), deteriorating financial status of municipal and state
governments, deepening social unrest, increasing tensions over the Panama Canal,
and more. Events during the past decade have followed to an astonishing degree
the blueprint which Dr. Beter revealed in his book.

In September 1974 Dr. Beter acquired a new distinction as “the man who opened
Fort Knox.” The previous April Dr. Beter had charged in congressional
testimony that the legendary U.S. Bullion Depository at Fort Knox had been
looted of America’s monetary gold hoard allegedly stored there. He stood ready
to present evidence and witnesses to substantiate his charges. But neither a
grand jury nor a congressional inquiry into the matter materialized…so Dr.
Beter then took his case directly to the public. Through lectures, radio talk
shows, and publication of his charges in a tabloid newspaper (National Tattler),
he was able to put such intense pressure on the federal government that a
completely unprecedented step was taken in order to still the public outcry.
The U.S. Treasury Department arranged a so-called “gold inspection” visit for a
few Congressmen and 100 invited newsmen on September 23, 1974. Significantly,
however, Dr. Beter himself was not among those invited…nor was any other
outside expert on gold. The celebrated Fort Knox visit and the so-called “gold
audit” which followed contained many irregularities which the Treasury
Department has never explained.”