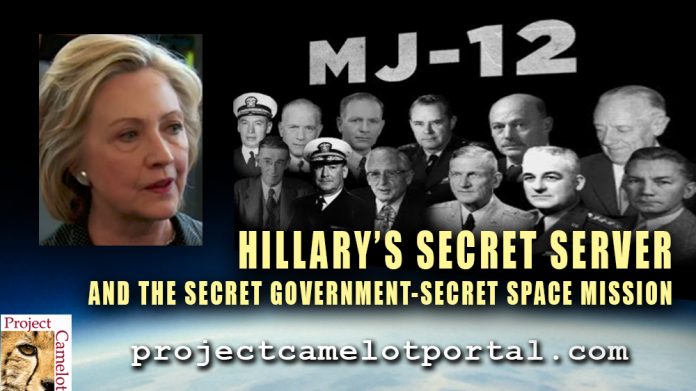 I have been watching this story progress and find it fascinating that no matter who talks about the existence of Hillary’s secret server (and the emails related to it) they never mention WHAT IT SIGNIFIES!  This is clear evidence of the Secret Government of which she is a part.  Nothing more.  It is not about the content of the emails no matter whether they contain information deemed to be “classified” or not.  The very existence of the server and it’s use are a clear indication that she is part of the secret government running the U.S. and in essence the secret space program which it protects.

What newscasters and Donald Trump should know and are or should be, really up in arms about is this fact.  They are simply not discussing the real reason this scandal is significant.  And if you watch it is in essence about disclosing the secret government’s modus operandi in public.  For once, this mundane bit of discovery has a much greater portend than just whether or not she defied conventional governmental methods of secrecy or not.  And some Congressman and women and perhaps a few astute journalists know this.

It is about time people discussing this on both sides of the issue recognize what is really being discussed and what it means.

Hillary is a card-carrying member of the secret government and completely read-in on the secret space program, our relationships with various ET races both on and off-planet as well as underground and interdimensionals.  This is crucial to know.  Donald Trump simply is not.

What Trump knows and what he may have gleaned or been seeded in terms of intel on his ‘road to win the White House’ is unknown.  I see two possible scenarios with respect to him.

What I also find rather surprising is that even those on the alternative side who claim to know so much about all of this have NOT recognized what’s really going on here with respect to the election.  People who should know better are falling for this ruse.

Further it is worthwhile to recognize that business (in secret) regardless of who is involved must be done daily.  In light of this, keeping secrecy (of the secret space program and the wars going on on and off this planet) as well as dealings with Earth humans will be considered necessarily hidden from the surface government at all times.  And so Hillary, as a loyal member of MJ-12/ Committee of the Majority / Psion call it what you will, is simply doing her job to maintain that secrecy.  That puts an entirely different light on the server and emails she maintained during her years as “Secretary of State” needless to say her “surface title” not her real title.

Along these lines, I have just returned from interviewing Captain Mark Richards, of Space Command who is in prison for over 30 years (framed for a murder he is said to have “masterminded”).  He states (for the record) emphatically that TRUMP will never get into office.  He says that Trump knows nothing and is consequently completely outside the loop when it comes to secret space and what’s really going on.  He also said they would probably kill him if he got into office.  “They” in this case meaning “those in power running the Space Program and Secret Earth Government”.

MARK talked clearly about the fact that he is in prison because they are fully aware of the backing and strategic connections that he has which he would bring to bear should he be released to bring down the side of the secret government which is currently running things.  He is their enemy.  But he is also working with a very strong inside opposition that is positioning itself to take over.  This is the faction that wants “some” disclosure but not all.. and who are against the current Bush Cabal / Luciferian Rebellion faction in power.

Without knowledge of the full import of what is happening here on Earth with respect to our battles with Reptoids and other nefarious off planet and inner Earth races there is simply no way to understand what is going on.  It is significant that not even Julian Assange or Snowden are telling the people what the existence of the secret server really means…Keep that in mind when you are out debating with people over some so-called secret emails Hillary is supposed to have sent!

I will be releasing my ‘total recall’ from my recent meeting with Mark as soon as possible.

It’s also important to recognize that people like Comey, Director of the FBI, is not on board with the Secret Government.  He is working for the side that wants to reveal the existence of a Secret Government.  With the backlash from the Bush Cabal against his recent move to reopen the investigation, he will likely be finding another job or have some sudden health problems or an accident in the near future.  That much is clear.

If you want to know who’s “on side” and who isn’t—simply watch who attacks Comey.  Needless to say, some will be forced to make statements attacking him but some are fully paid members of the cabal and those are likely well known in many quarters.

What we are witnessing is the SURFACING of the real split within the secret government.  Those on the surface serve the secret government not the surface government whether they know it or not.  The Secret Space Program has at least one laudable objective, which is to maintain Earth Human control of Earth and our solar system.  This makes its mission critical to our survival.  Which means that what they are doing to safeguard their operations is going to serve that objective.  Whereas I do not agree with the faction running this program, I can say, that with regard to those on our side, who are fighting the battle on our behalf to safeguard Earth and humanity, in a war with races that would rather see humans reduced to slaves and fodder for their own purposes,I support them.

What I do not support are those in charge of the secret government and secret space program who have been taken over by Reptilians and Anunnaki influences who are bending this program to serve their devious aims.  The split within the Secret Government is playing out on Earth and mirrored in the surface political struggles.

Militaries within the U.S. have allegiance to the Secret Government.  They are also aligned with various ET / Inner Earth factions.  Much of what you are hearing in the news is a surface play to keep the people occupied and confused.  Start applying the knowledge you have to reading what’s really being said from one faction to another.  They often use pundits and news outlets to warn their opponents.

Trump is aligned with the Scottish Rite side and may be a candidate put forward by a certain high level faction.  In the end, he serves a purpose.

As Jordan Maxwell says, it’s one bird with two wings… The Russians on one side and the U.S. on the other.

Oh, and with regard to the Clinton Foundation: This is no doubt part of the the ‘follow the money’ black project funding sources in use in service to the Secret Gov/ Secret Space Program. —Kerry Cassidy, Project Camelot