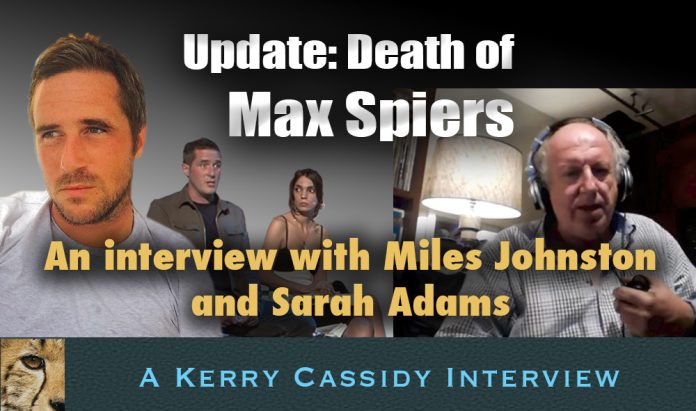 THIS STORY IS NOW BEING COVERED IN VARIOUS ARTICLES ALL OVER MAINSTREAM PRESS INCLUDING :  YAHOO NEWS, DAILY MAIL UK, TELEGRAPH:, HUFFINGTON POST, THE SUN, THE INDEPENDENT and many more… reporting this.  INCLUDING THE GUARDIAN WHO QUOTED ME:

British conspiracy theorist, 39, is found dead on a sofa in Poland just days after texting his mother to say: ‘If anything happens to me, investigate’

Max Spiers, 39, originally from Canterbury, was found dead in Poland

Medics ruled he died from natural causes despite no post-mortem

Friends claimed he died in an apartment after he ‘vomited a black liquid’    Read more: www.dailymail.co.uk/news/article-3841782/British-

THEY WROTE:  …”On one website, Project Camelot, a blogger wrote: ‘The entire circumstances are suspicious and I urge everyone to encourage the release of details about what really happened and call for an autopsy.’    ACTUALLY THAT IS ME, KERRY CASSIDY.  They are quoting me without proper atribution.

What this is about is me saying right after Max’s death is that it was suspicious and his mother is now proving that by saying Max warned her…this only now coming out nearly 3 months after the fact.

I Wrote the following comment in their COMMENTS SECTION:
HEY: I AM THE SO-CALLED PROJECT CAMELOT BLOGGER YOU QUOTE IN YOUR MAX SPIERS ARTICLE ABOVE. … YOU ARE QUOTING ME: …”On one website, Project Camelot, a blogger wrote: ‘The entire circumstances are suspicious and I urge everyone to encourage the release of details about what really happened and call for an autopsy.'” — KERRY CASSIDY, PROJECT CAMELOT (Founder/CEO, investigative reporter/documentary filmmaker.)
I interviewed Max Spiers a few years ago and reported on his murder the day after it happened with Miles Johnston.

AND My original interview with Max Spiers and Michael Prince at the Super Soldier Conference May 2013: