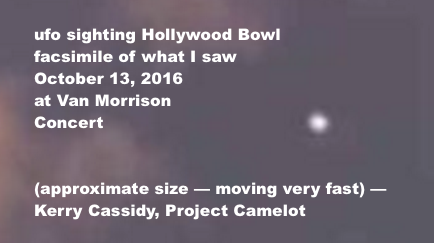 Last night while watching Van Morrison perform at the Hollywood Bowl I looked up at the sky just in  time to see a very large UFO — cruise rapidly from one cloud to another and disappear!

The ufo was extremely clear — a big perfectly round directly overhead — moving very fast — a round white light… It was NOT a satellite.  I did not see any detail but it was so clearly defined and large I couldn’t miss it!

By the way it was an awesome concert and huge crowd!

This is an example only of what I saw… I did not get a photograph!