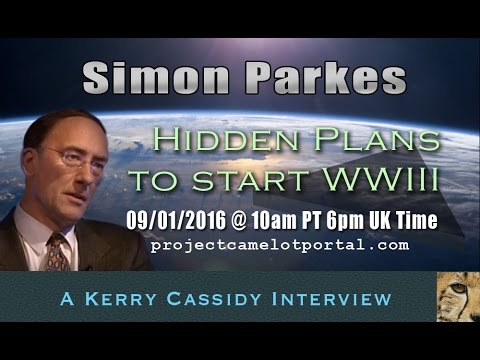 I INTERVIEWED SIMON PARKES Thursday, September 1st at 10 AM PT ….

THIS IS A MUST SEE INTERVIEW….

SPECIAL NOTE:  REVISED TRANSCRIPT NOW ADDED! SPECIAL THANKS TO THE PERSON WHO PROVIDED THIS!!

RAMPING UP OF MILITARY ACTION?  THE BANKSTERS ARE RUNNING OUT OF TIME FOR THE FINANCIAL RESET and need to get WWIII going to make there plans for ONE Word Government and One World Military a reality.

US Deploys 1,000 Troops To Russian Border

So why suddenly warn the people to prepare for what may well in essence just be another FALSE FLAG attack orchestrated by the U.S. and their allies?  Why the warning from Merkel who is one of their allies?  It may have to do with some reluctance by Germany to put troops on the ground in Syria….OR the preparation for a coming financial reset and escalation leading to WWIII.

NEW UPDATE:   THE BANKERS want to start WWIII.  See Simon’s announcements indicating there is a marshaling of troops in Europe along the border of Russia.

There is also a strong indication that the recent ITALIAN EARTHQUAKE was the result of a targeted hit via HAARP.  This may indicate that the ILLUMINATI and their Anunnaki handlers issued a warning to the Italians to get them on board with the War agenda.  The TECTONIC WEATHER WARS WEAPON was likely the shot across the bow to Italian illuminati and the Vatican….

Whether this sudden announcement by Merkel (and apparently The Czech Republic  and now Finland, according to Simon) has anything to do with the August viewing is not known.

Angela Merkel may have been given a warning of an attack by the U.S. and Illuminati that unless Germany gets into a war stance with them they will be attacked….  The attack could be an EMP attack on their grid (hence the urging by Merkel to her people to store food and water (something you don’t need to do for a supposed ‘terrorist attack’.. Indications are that MERKEL is anticipating something MUCH LARGER….

WW III? China Tells Citizens to Prepare for “A People’s War at Sea”