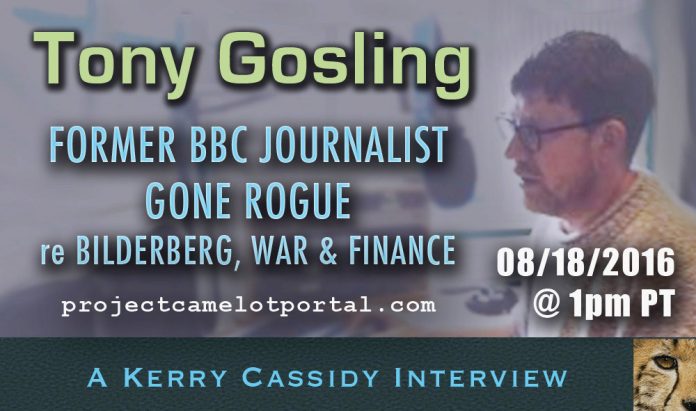 On Thursday, I interviewed former BBC journalist and investigator, Tony Gosling (bilderberg.org).  We talk about global politics, Brexit, Russia and Turkey as well as many current events and the state of global finance.

…”Beginning his working life in the aviation industry and trained by the BBC, Tony Gosling is a British land rights activist, historian & investigative radio journalist.

Tony has spent much of his life too advocating solutions which heal the wealth divide, such as free housing for all and a press which reflects the concerns of ordinary people rather than attempting to lead opinion, sensationalise or dumb-down.”

On Wednesday night I interviewed Robert Stanley, radio show host for Unicus Radio and editor of Unicus Magazine about Artificial Intelligence and the Alien Agenda.

We will be referring to Wes Penre’s recent book on this subject.

Robert M. Stanley has traveled to nearly 60 countries during his life-long pursuit of modern and ancient mysteries. Over the past 30 years, Robert’s quest for unique ideas and information has led him to research and write about many controversial topics. His ongoing investigations have been featured on television, radio, print and the Internet.

Born in 1959, Robert is a native of Los Angeles, California. He grew up in Malibu and in 2008 moved to southern New England with his wife, son and dog. In 2015 he relocated his family to Asia. He enjoys surfing, hiking, motorcycles, tennis, photography and composing music.

Formerly a corporate journalist for HONDA Research & Development in Torrance, California, Robert is currently employed as a corporate editor for an international company based in Hong Kong.
He is the author of Close Encounters on Capitol Hill and Covert Encounters in Washington, D.C.