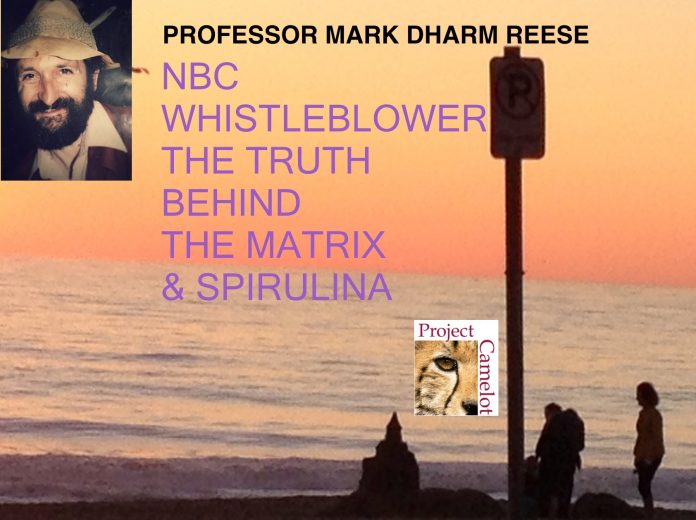 I interview Mark Dharm Reese, a fascinating quixotic character who lost his job back in the Vietnam era when he suggested to the executive staff at the network that they should cover a news story about a demonstration at UC Berkeley where the demonstrators (students) were illegally sprayed with poison gas (tear gas?)… The reaction of NBC at the time is indicative of the way the press has been able to decide which stories you hear and which you do not. Mark has been a Pentagon consultant, Yale professor and a myriad other professions over his lifetime. He is clearly quite brilliant and brings forward a special tonic that he believes can change people’s lives. BIO: (WRITTEN BY MARK REESE) – My work experience is so vast. I need to compress. I am a high priced consultant whose clients include saving real grief, for them in an awkward situation: JANE FONDA, NBC-TV, U.C.L.A. Film.School curriculum committee to the Dean, Ditto University of Washington. FRANK SINATRA (saved him conviction for crime not done, framed, $3.5 million fine in today’s dollars. His men spent 2.5 years to free him. I did so.2.5 weeks. DIANA ROSS. HILLARY CLINTON at Rose Law. First Lady Clinton, was committed in contract to put my solution into action. Assigned to AL Gore. “Brilliant,” his man said. “I have no doubt it would work. When start? Oh, we’ll.never do this.” Click. Just before leaving the White House, Hillary writes me on her official stationary: “Professor Dharm-Reese, I am so sorry we never got this done.” That was 1.5 years since the AL Gore incident. I had stopped communicating with her for that time. Big suprise. Sen. Diane Feinstein wrote me saying “You .ust nm be a great humanitarian. United Nations Asst. Sec. Genrl. ROBERT MILLER wrote me: Professor Dharm-Reese your views on how to have peace in the Middle East are among the best. ..using at once”. The U.N. performance from our effeorts.got.worse.over time and pestered out. THE DALI LAMA blest my solution in writing. Copy on file. Burger King Hawaii GM says: “You are worth your weight in gold.” Jesuits hired me as their youngest Dean in their history and the best qualified. Instead I took the position with Yale, at “The Harvard of the East”. Was an independent contractor for Pentagon. Twice. Promoting and acquiring a superior quality of character in new officers for all 5 services. Was trouble shooter for a man ranked one of the 100 most influential individuals of the 20th C. TIMES OF LONDON in 2000. And for.King’s Towing on Maui. All crimes . evaporated.