NOTE:  This broadcast is now complete and will be posted to YOUTUBE shortly. 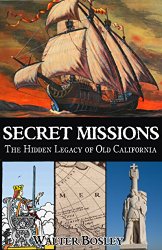 Investigator of historical occult mysteries, author of pulp fiction novels and a screenwriter.After nineteen years in national security, Walter Bosley is a licensed private investigator in California where he also runs his small press publishing company, Lost Continent Library, founded in 2002. Bosley has traveled much of the world, both on the job and off, including trips through Mexico and South America with David Hatcher Childress whose WEX Magazine has published articles by Bosley.Walter Bosley was born in San Diego, California, and attended SDSU where he earned a B.A. in Journalism. He has been employed by the Federal Bureau of Investigation, is an inactive reserve officer in the US Air Force for which he served as a Special Agent of the AFOSI while on active duty, and worked as a counterterrorism consultant for six years following military service. Bosley spends his time writing fiction and non-fiction, as well as investigating strange mysteries, in between PI assignments. The latest news about Bosley’s projects can be found at the following blogs: empireofthewheel.blogspot.com & lostcontinentlibrary.blogspot.com