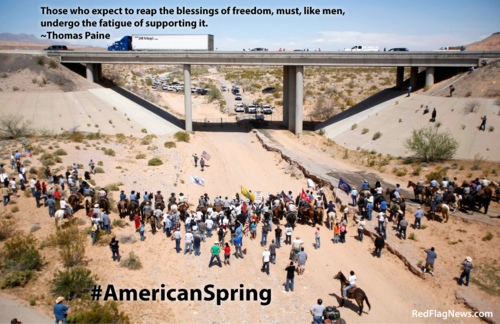 This reminds me of a book I read recenlty about the hidden resistance in the south of France during WWII.. when Hitler invaded France but many people still carried on as usual thinking it wasn’t all as dark as it appeared.

The recent standoff at the Bundy Ranch was a throwing down of the gauntlet for States Rights vs. the sell-out from the Federal Government to China of our LANDS in America…. A sad portent of days to come.

Nice to see some people in the alternative community and militias standing up for the Bundy rights…. The behind the scenes deal brokered by Senator Harry Reid and his son obviously does not bode well for Americans.  This is likely happening all over the states.

And another thing… I am trying to get my head around this whole idea of selling the TOPSIDE of America while meanwhile the underground bases are fully occupied and operational by the SECRET SPACE PROGRAM…  Exactly how does that work?  Does this mean when the Secret Gov wants ACCESS to its hidden holes in the ground they have to get a right to pass from the Chinese?

Who’s actually running this show?  Or is that particular parcel owned by the Greys and Reps?  Archons or….