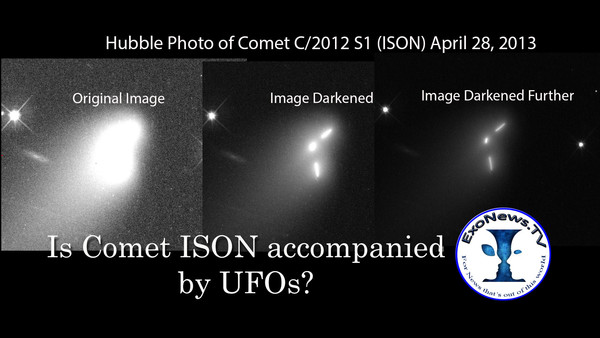 Addendum to my prior article re Interstellar Armada aka ISON:

Stew Webb has added the following note to the original Gordon Duff article regarding ISON and incoming ‘rocks’ detailed and commented on by me in my previous article “Interstellar Armada and Big Rocks”.

..”TOP SECRET From Intel Sources not the author make this viral for all Humanity: What the Government will not tell you. We all have maybe a week maybe a month we have 2 large comets and 300 smaller rocks they are shooting them now with bombs, Russia also involved (Google Russia Rocket tests this week the cover story). Ison is made of platinum or gold they cannot break them up. If a semi-truck size hits yellow stone the volcano goes off. One of the 2 larger football field size is expected to hit London another to hit the Northern Hemisphere real soon. The one that hit Russia this year was the size of a refrigerator. For those Bible believers could this be in Revelation 8:11 (Wormwood) the two asteroids that destroy 1/3 of mankind?”– Stew Webb, Veterans Today   www.stewwebb.com/2013/10/13/what-can-be-told/

Michael Salla, from Exopolitics.org writes the following article outlining the controversy as to whether ISON is accompanied by UFOs or not…

…”Amateur astronomers have analyzed the Hubble telescope images and found that one of them shows the core of Comet ISON comprises three objects – two of which are highly symmetrical cylinder shaped. The three objects clearly reveal themselves when the lighting in the photo is turned down. You can test this yourself here or watch the embedded video on the left. According to the amateur astronomers, NASA could not have failed to have noticed this. It is claimed that NASA is hiding the true composition of Comet ISON with images it has released that show only a solitary nucleus. Did NASA simply overlook that the comet’s core comprises three objects or is it hiding something?” — Michael E. Salla, Ph.D. Exopolitics.org

Camelot Disclaimer:  We do not necessarily agree with the above characterizations by Stew Webb or Michael Salla, of what may be headed this way.  See my prior article for more on this. -Kerry Cassidy