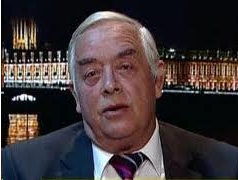 YOU TUBE OF SHOW:  www.youtube.com/watch?v=neZxg4PG-Cs

Peter Eyre: Joined the military at the tender age of 15 and whilst in his teens travelled the world. Conflicts in the Middle East (Aden-Lebanon-Suez-Trucial Oman), Far East (Borneo-Indonesia-Malaysia) and the “Cold War” were in full swing. He served on many ships & also staffed FOST, SOSM and NATO. Peter participated in landings in the Middle East and Borneo, covered the icy waters of the Artic (searching fishing trawlers) and the hot waters of the Gulf and Far East (searching vessels for illegal gun running). His life as a Supervisor, Manager & General Manager covered many sectors: Construction-Aviation-Marine-Oil & Gas-Mining-Search & Rescue-Ambulance-Fire-Police –Communication-Airport/Oil/Gas/Mining Security-Customer Relations – VIP Centre. He then started his own consultancy business and has spent considerable time in the Middle East including Iraq & Sudan.

Peter’s life took a dramatic turn at the start of the 21st Century when he started to see things from a totally different perspective. He became humbled by the life of the Irula Tribe (Adivasi’s) in Southern India where he spent much time. He has carried out years of research covering high technology – poverty. In 2007 Peter assisted in the making of a documentary film “Impoverished Villages of Scheduled Tribes in India” He now reflects on the excessive greed in this world, the wars, the pain, the suffering & the poverty that “American Imperialism” and “American Foreign Policy has created. Peter believes all of this is directly linked to a rise in self induced terrorism, conflicts, genocides and the displacement of millions of people around the world. We have a critical deterioration in poverty at a level never seen before.

..”Forgot to tell you that I believe the alleged Syrian munitiion dump explosion a day ago that they said was as a result of a rocket attack by rebel forces was not what they have declared……….it is very clear to me that this was one or two weapons dropped from an aircraft and was a thermo nuclear weapon……..it is very easy for Israel or their allies to drop a bomb or missile outside of the borders ……..this is referrred too as a stand off weapon and allows the aircraft to drop the weapon from outside Syria and then guide the weapon onto its target……..this again happened not so long ago at night and was clearly a nuke……so who is nuking Syria?”–Peter Eyre

The first shot show the first bomb/missile exploding and the second shot shows a secondary weapon to the right of the first one…….this was certainly an air dropped weapon….

You can publish and reveal the source….I am confident on this issue

…The Israeli Air Force carried out an attack some time ago at night and that was also believe to be a nuke and I am sure the IDF are at it again or maybe the US are assisting them again on this daytime raid……when a ammo dump is attacked it is normally a series of explosions lasting many many hours and not just one huge explosion…..we saw this in Kuwait and Baghdad when two ammo bases were hit……..this is certainly not a conventional explosion.”

I am told Israel was given some non-nuclear technology that looks and acts like a nuke but is not.  Some of these weapons may have an EMP pulse.  But for all intents and purposes the affect is the same.

The U.S. is exiting the Middle East while the Chinese and the Russians are moving in….

Although this is most likely a ploy… 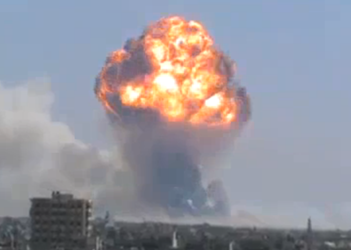 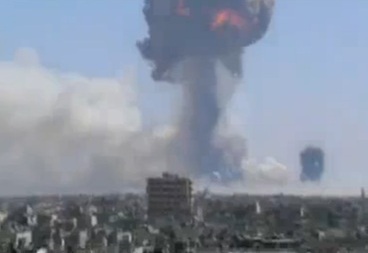