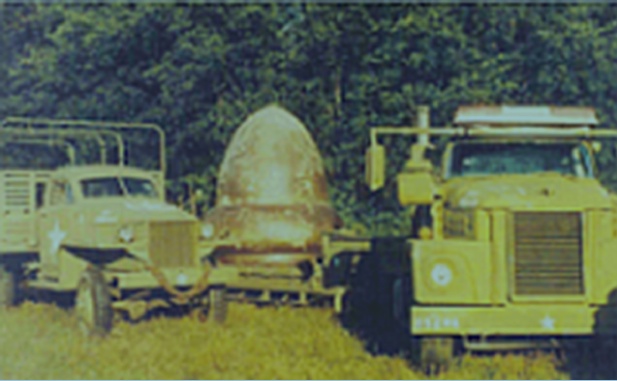 According to a source, there were 2 prototype Nazi Bells that were secreted out of Nazi Germany at the end of the war.  One of them, apparently went to Russia and from there, due to the heavy radiation signature had to be encased in several layers then was flown via the Russian space craft taken for a UFO in the Kecksburg sighting incident, to the U.S. landing in Kecksburg Pennsylvania.

My previous article about this is here.  In that article I questioned Clark McClelland’s story about the Kecksburg incident being a Russian craft with the contents (shaped like a bell or acorn).  But with this new information, things begin to make sense.

What I am being told is that the actual bell was recovered in Kecksburg and that it is 6×6 feet in size.  However, there were actually two.  The other one is missing.  They are saying it is somewhere in the Middle East, very likely, Iran, Iraq or Syria, that it may, for a time, have been in Egypt.

This missing bell may be a later prototype than the one in the possession of the U.S. secret space program and therefore they are in a mad rush to locate and gain possession of the 2nd bell.  In essence, both bells are said to contain the technology for warping time, free energy and more.  They contain the secrets that CERN has been searching for and not finding for decades.

This source also reports that the original inventor was a Russian working for the Nazis… possibly of Jewish descent.  This lends credence to why the first bell ended up in the hands of Russia.  What kind of deal was made in order to get the 1st prototype bell shipped over to America back in 1965 is not clear.  However, there is no doubt that wars and huge amounts of money factor into this hunt for the 2nd Nazi Bell… and if you trace the trajectory of countries invaded by the U.S. for the past 10 years what you are seeing is a pattern that follows the possible trajectory of the missing bell.

What the secret government is most concerned about (and surface government as well) is that the 2nd bell not fall into the hands of unfriendly governments such as Iran, Syria or North Korea… (not to mention China).

While checking with various contacts on the above story it was suggested to me by Ricardo Baretzky, an analyst and global security threat specialist, that this 2nd bell poses a threat to the world that should not be underestimated.

He wrote…”Should this ” Bell” capability truly exist and fall into the wrong hands such as Syria or North Korea than, yes certainly this would pose a threat not only to western countries but all nations including the UN. It therefore certain that this probability would be examined by the Counter intelligence officers of global agencies as a possible threat to any nation that could stand a risk of being over powered by force or blackmail by the opposition.”–Ricardo Baretzky

I plan to check with Clark McClelland to find out whether he knew what this acorn shaped device contained.  At this time, from what I understand, what was shown in this photo is the casing containing several layers of protection for the bell.  The writing seen around the rim is probably copied from the actual bell, which I am told does have such writing.  The lettering has some resemblance to Hebrew writing and could very possibly be of ET origin, with hologram-type properties to assist in safe transport from a hyper dimensional angle.

I also spoke to Michael Schratt, an aerospace historian who specializes in classified aircraft, regarding this story and he confirmed that the above explanation for Kecksburg is very possible in his view.

More on this as it becomes available… developing.

Note:  Ricardo Baretzky will be my special guest on FRIDAY on Sceptre Radio Network on a newly scheduled time period at 10 AM Pacific time.  We will be discussing the above as well as his recent report from World News Tomorrow about shots fired between a UFO and TR3B or similar type craft.  It is also possible the actual shots were fired from the South African base in that vicinity.  Just recently a Naval Officer went on Facebook from that base and confirmed that he also witnessed this event.

This story was also reported in Veterans Today here.

“The Nazi-Bell device consisted two of counter-rotating cylindrical containers. The containers, which were positioned one above the other measured approximately 1-meter in diameter, and were filled with cryogenically cooled and frozen Mercury metal. There was a frozen core of a metallic paste, which served as a “high permeability material” for the EMG (electromagnetic-gravitational) field.”

For more information regarding the Nazi Bell and more see our Project Camelot interview with Igor Witkowski here.

I have received added information regarding the Kecksburg/Nazi Bell incident from Clark McClelland and am working on getting clarification on this.  It sounds like he is saying the Kecksburg craft contained a “back engineered bell” along with the addition of something inside related to the USSR clock (?) …

I also have added information from Sean David Morton who wrote the book SANDS OF TIME based on the secret files left behind by the former head of Area 51.  This whistelblower, prior to his death, instructed his lawyer to give Sean his files, on the condition, that Sean write a fictionalized account of the true history of the secret space program!  Within those files is information pertaining to Kammler, what happened to him and the Nazi Bell.

Just how much of that information made it into the book is not clear.  However, when I contacted Sean about this new information about the hunt for the 2nd bell and the Kecksburg incident, he suggested that the contents of the Kecksburg ‘acorn’ is a back engineered bell that a Soviet scientist may have been using to travel back in time!

Sean states, that the Nazi bell has the technology to allow us to travel through time, (as is commonly thought) and that the original bell ripped a hole in Space time… The original rip in spacetime is said to have ‘let in’ the greys and other not so friendly aliens we have been dealing with since that time.  The Philadelphia Experiment for example is said to ripped another one…

Interestingly, Sean says, …”KAMMLER had found a way to use these gravity fields without ripping  a hole in Time/Space…BUT…MORE IMPORTANTLY…he knew how to CLOSE THE HOLES and STOP access points for the invasion.”

Clark states, based on information from his insider contacts that Kammler was secreted into the states and ended up in Dayton, Ohio… There is no doubt, according to everyone I talked to, that Kammler had the key to a great deal including the possible mystery of the Nazi bell.

All of this needs further investigation and needless to say, only deep insiders are party to exactly what the bell technology really can do.  Suffice to say that possession of a bell would change the balance of power on this planet and if a 2nd bell really does exist, and is missing (or not in possession of the US secret space program) it is easy to assume that ‘they’ (the secret government/secret space program) would be desparately hunting for the lost bell to this day.