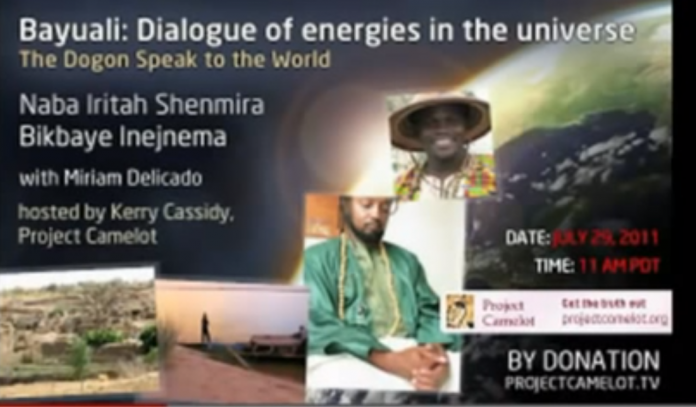 The Dogon Speak to The World – Live Event with Miriam Delicado 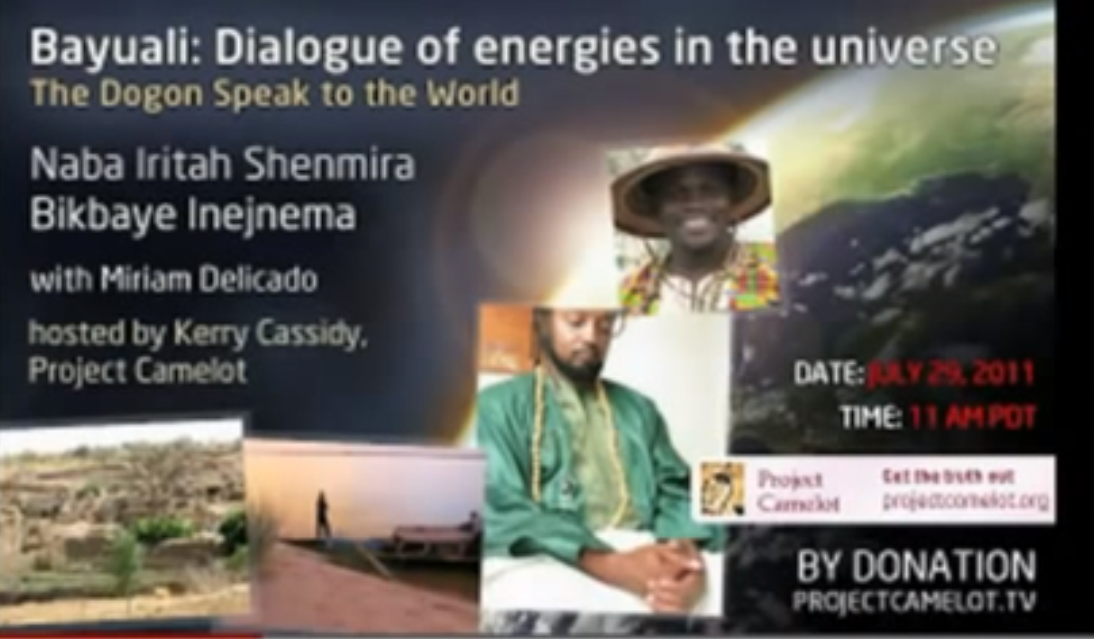 JULY 29, 2011 – 11am PDT
THE DOGON SPEAK TO THE WORLD
COMPLETE LIVE EVENT
NO PASSWORD NEEDED
projectcamelot.tv

“The objective is to create a morphic field of resonance that has great power and will raise the vibration of the planet.” — Kerry Cassidy – Project Camelot

Bayuali : Dialogue of energies in the universe.

Knowledge that has remained intact since the time of the Pharaohs is now being shared with humanity to assist in restoring balance to our world.  Indigenous people around the world are reading the signs that our planet and humanity are out of balance.  Many tribes are now coming forward at this crucial time to speak with the world and share their ancient knowledge.

Through uniting the indigenous people with the rest of humanity we have the potential to restore a world in balance.  Dogon elders of the traditional Kemetic priesthood recognize the necessity in this time to provide an alternative to the destructive/self-destructive lifestyle that the modern, colonial, political, educational and religious systems have maintained for the last two thousand years.

This knowledge has been guarded by Traditional Dogon Priests, being passed from generation to generation only through intense initiations for thousands of years.
(The Dogon are not only a tribe residing in the cliffs of Mali but a bloodline consisting of many tribes whose ancestor’s were considered the upper echelon of the Nile and Niger Valley civilizations).

It is this knowledge that is now being released to the world so we may rid ourselves of the pollution that “modern” society has imposed and return to the knowledge of our ancestors.   There are links between human beings and the Bayuali (Earth Energies), or, channels of the Earth that have both positive and negative effects.   Through the dialogue of universal energies of the Bayuali and Yennu, we learn what this means to our existence. — A message from the Dogon; Bikbaye, Iritah and Miriam Delicado.

This relates to the gathering of the Rainbow Warriors, which include the Camelot audience, indigos and other new and incoming children of light and other groups around the world…ultimately to encompass people everywhere on the planet.

The objective is to create a morphic field of resonance that has great power and will raise the vibration of the planet. Once connected through meditation and in full awareness, many actions are possible such as healing the earth, mitigating earth changes and more…. It goes without saying, that many groups and individuals are currently working to alter the earth changes, change the consciousness around the planet and interfere with the dark energy that pervades areas of the globe at this time. But a greater wholeness must be realized.

With that in mind, in order to connect the indigeous people with each other and raise awareness and encourage all to work together bringing forward hidden knowledge from all corners of the globe, Miriam and the Dogon need your support. The time for secret societies on all sides of the spectrum is done. Unity consciousness demands that humanity recognize itself in all its aspects and begin to come forward in full awareness to create together the kind of world we would all like to see.

For perhaps the first time in the history of this planet, members of the Dogon tribe have agreed to come forward and speak out on a live Project Camelot Roundtable regarding the importance in bringing together the tribes to work to save the planet and contribute their part in raising the consciousness of humanity.

Part of the purpose of the event will be to raise funds for travel and meetings to happen between the leaders of the various indigenous tribes around the world.

www.projectcamelot.tv
This event took place on Livestream at:www.livestream.com/private/projectcamelotlive
(free or by donation)