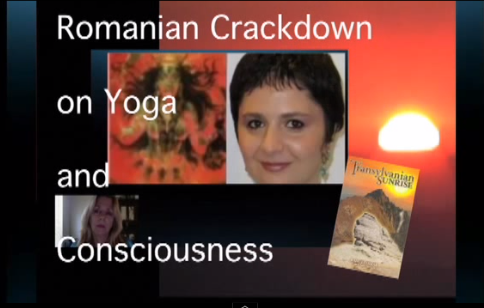 UPDATE :  Note of Caution with regard to the Yoga school also known as MISA

I have received a number of complaints regarding this particlular school and the leader known as Bivolaru and at least some of the members.  Please note that this video is not about the internal dealings within this organization but rather in regard to the crackdown in Romania and worldwide on the pursuit of higher consciousness whether using Yoga or other methods.

In the interest of full disclosure and fairness I will be posting at least one person’s information that they have collected regarding sex for money and other violations of power over others exhibited by the leader and certain members.  The accusations are coming from several people and therefore must be given some serious consideration.  However this is not the topic or concern of this particular video interview.

I have also been contacted by a back channel source in this regard with substantial information regarding this particular school.  I have no desire to place Camelot in the middle of any controversy with regard to the goings on in this particular yoga school however.  Please be aware that all Yoga schools and other groups and organizations are not the same nor are the practioners of various spiritual practices and disciplines to be considered the same or suspect because of a few cases of misuse or malpractice.

It is very important for people to recognize that Yoga and other such groups are activating Kundalini energy and that activation often results in imbalances and stimulates added sexuality and hidden powers in humans.  This is a good thing but it can be distorted and used to serve the dark side.  Apparently this is what has happened here.

This in no way invalidates the information in this video or the important subject being covered therein.