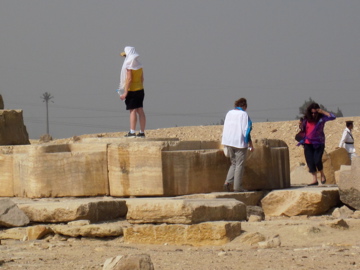 Just about at the end of this trip. Today we go to Abu Garab (not sure of spelling) and see the high tech spaceport in alabaster that is thought to have come from Atlantian technology. It’s totally different than anything else in Egypt. Four and a half years ago when I traveled here with William Henry and Jordan Maxwell we visited this site as well.

I will be returning on Oct 24th. Internet access has been difficult if not impossible at times. Getting online now iis a nice change.

I hope to be able to interview Carmen Boulter in the next day or two before I leave. She has a wonderful grasp of what is really going on here in Egypt both now and in the past.

Special note on John Searl. Apparently he is entering the GE ECO imagination competition (100million dollar prize) and needs your support to succeed. They ask that you go here and VOTE FOR SEARL and his magnetic engine.

Added note: we have a never released interview with Searl that I will attempt to edit soon and get out there. We had some problems with it and it is part of our backlog of unedited video interviews.