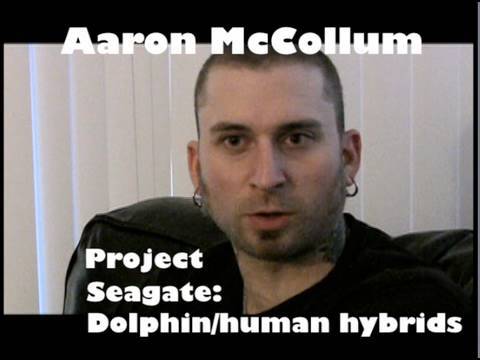 As promised, here is Aaron's personal story. As Aaron is on a journey of self-discovery, there are still areas of his life that he does not recall or understand. At the time of this interview, however, it is beginning to come to light that he himself may be, a dolphin/human hybrid.

In a stunning revelation, he describes his role in military abductions, working alongside nonhuman entities (greys) taking targets, (male and female) from their homes late at night to underground bases for experimentation and programming. He talks about the retrieval of renegade agents, where the programming had malfunctioned… Flying in a TR-3B — the target was picked up, reprogrammed and replaced back in their homes without the neighbors or other occupants of the home being aware.

During those early years his cover was acting as a fully functioning member of the U.S. Coast Guard. Simultaneously, he was a covert agent, leaving his company at night or on weekends to handle operations that involved MILABS (military abductions) as well as taking part in what he called "terminations" where the individual was terminated rather than reprogrammed.

At a certain point, he was based in the area around the Caribbean where he found himself involved in a top secret project called Project Seagate at an undersea base. There, his experiences become even more bizarre involving experimentation with dolphins, time travel through portals and telepathic communication.

Forthright and unflinching, Aaron is determined to know and understand his past in ways many would hesitate to pursue. His courage when faced with the mind boggling nature of what really happened to him is an inspiration. Owning that past and taking charge of his life is his daily passion. I applaud his firm commitment to find out the truth and to reveal it regardless of the light in which it puts him. Aaron has gone from half-believing himself to be mad to uncovering secrets that few would even dare to contemplate. Coming from a place within of strength and only just beginning to tap into the real truth that goes to the root of the purpose behind his incarnation here on this planet, at this time, he stands as a beacon for all those who hide in the shadows of self-doubt and denial.