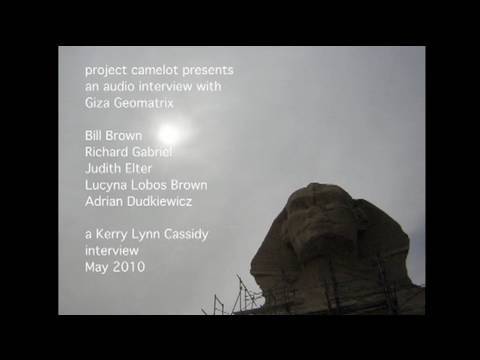 As mentioned in my blog entry of May 3rd… There are mysterious comings and goings in the cover of night on the Giza Plateau. A film has been released that shows the removal of items from underground and in the background is the clear sound of heavy machinery. The person who shot it used a cell phone and is now on the run. Before leaving the country he gave the film to Bill Brown and his partner Richard Gabriel. This person’s life is now in danger. Brown and Garbriel cut revealing aspects of the film to hide the identity of this person as well as to hide the location from which it was filmed.

The Giza Geomatrix members have been working out at the Giza plateau, a few of their members, originally were part of the Polish team from Warsaw University. Bill Brown, who is giving a presentation of their work on May 9th in Chicago, has been to Egypt 30 times in the last 5 years. He has been working on digs around Egypt and is known to the head of the Egyptian Antiquities organization (SCA), Zahi Hawass. He has also been filmed as part of a National Geographic special. This team has aslo been investigating another incident in September, where 6 people died in mysterious circumstances, were buried alive in an illegal dig.

Among other things, their research has revealed secret burial grounds and the possible location of Khufu’s tomb. Using ground penetrating radar they have been able to llocate the tomb as well as numerous locations of treasures hidden underground. Their interest in coming forward at this time is to release this secret film and to reveal the subterfuge and suspicious activities going on around the pyramids and at other sites around Egypt. Their objective is to stop the secrecy and encourage open disclosure of important finds in and around the Giza Plateau.

But their purpose there is much more complex. I encourage everyone to go to their website, Gizamap.com and watch the presentation there, the intro and the one entitled “Earth Protection”. The information they are in the process of revealing may hold the key to preventing the pole shift and survival of humanity. For more info watch their presentation called Earth Protection at gizamap.com

This audio interview is the first half of a two part series to reveal what they have discovered.