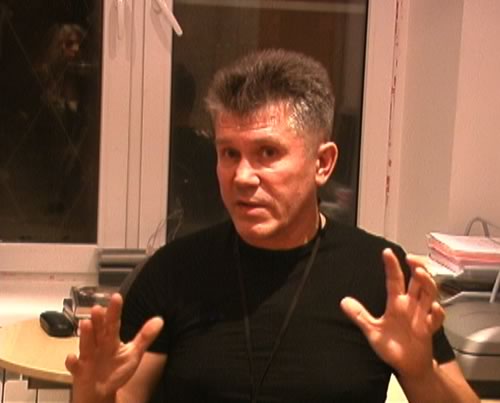 Dr Valery Uvarov is the head of the Department of UFO Research, Palaeosciences and Palaeotechnology of the National Security Academy of Russia, and has devoted more than 15 years to ufology as well as to the study of the legacy of ancient civilizations.

Valery speaks excellent English and is well-known in the west, having been asked to speak at a number of American UFO conferences. Notably, he was invited to attend the very exclusive 1995 Rockefeller-sponsored Alisal Ranch event which we first learned about from Bill Holden.

In October 2007, Valery invited Project Camelot to his St Petersburg home to present some controversial theories behind the 1908 Tunguska incident, the significance of 2012, and the coming magnetic pole shift – and describes the intriguing Russian construction of nine large pyramids between St. Petersburg and Moscow. The intention of this fascinating experiment is both to research new approaches to curing cancer, and to employ the pyramids as a sort of centering device during the next few years as we move closer to the galactic plane.

Valery was representing the Russian government when he spoke to us, and has been one of their leading researchers and spokesmen in the area of UFOs and consciousness. Although his ideas are controversial, our interview reveals some of his very interesting personal background and offers one or two clues about how the Russian government may be regarding the changes which could be headed our way.

Our publication of this interview has been delayed due to technical editing problems [Note: the MOV files are very large downloads and the video may best be viewed on YouTube] – as well as our intention to release this at the same time as our interview with Dr Vadim Chernobrov, a Russian physicist investigating time travel and other paranormal phenomena. Due to Project Camelot’s workload and a number of translation issues on the Chernobrov footage, we’ve not been able to release these concurrently as originally planned. We do still intend to release this most interesting Chernobrov video soon.