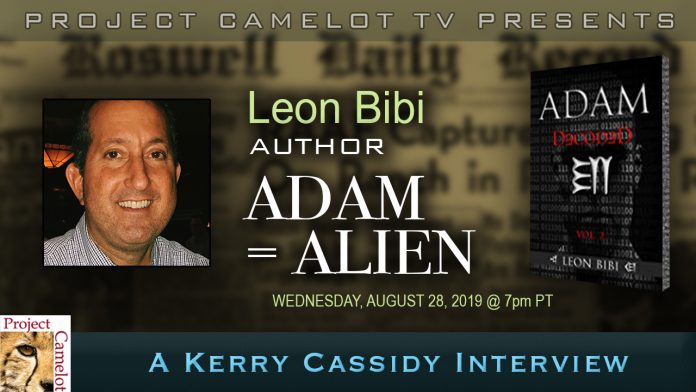 INTERVIEW:  My guest is Leon Bibi author of “Adam=Alien”, “Adam Decoded” and other books.  See short bio below.

BIO:  Leon Bibi (1965 – ) was born in Brooklyn, NY. His father was a WWII veteran having fought in D-Day on the beaches of Omaha Beach. Leon attended high school in Riverdale, NY at the prestigious Riverdale Country School, college at Washington University in St. Louis, and law school at the University of Miami. Leon was CEO of his father’s lighting business for 22 years, and a member of Young Presidents Organization for 17 years. Leon is the author of “Adam = Alien” published in 2014 and “Adam Decoded” published in 2018. They are part of “The Adam Series” trilogy.

Leon is an expert on subjects such as Human Origins, Biology, and Ancient Mythology and Archaeology. He is a believer in Ancient texts representing actual human events and true history, and his thesis is both controversial and explosive.

Leon is an adjunct Professor of Alternative Science in NJ, has been a guest speaker on “Coast to Coast AM” radio show, and will be on the History Channel’s Ancient Alien Series television show next year.