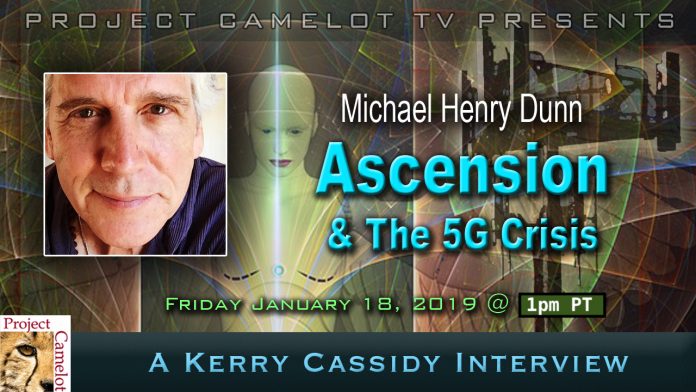 I interview Michael Henry Dunn at 1pm PT on Friday, January 18th.
Michael Henry Dunn, author, actor, musician and activist, will be sharing his views re “Geo-Political Ramifications and Prevention of the Implementation of 5G – Waking the public up to the nightmarish 5G scenario is essential if we are to prevent the implementation.”
…”The reality (or delusion) of the 70,000 sealed indictments, supposed restoration of the Republic, Global Currency Reset, take-down of the pedophilia network, etc., as it relates to meaningful activism against 5G.”
See link for more info: www.michaelhenrydunn.com
Bio:  Michael Henry Dunn is a human rights advocate, scholar, author, musician, and a globally recognized commentator on issues of human rights and the restoration of the Rule of Law. As a member of Self-Realization Fellowship, he has practiced meditation for some 30 years, leading meditation and chants at spiritual centers worldwide – stories woven into his book, “Romancing the Divine – The Art and Science of Falling in Love with God.”
A recognized authority on the Shakespeare authorship issue, he has lectured at universities in the US and Europe on Elizabethan literature and history.
As a composer and vocalist, he has recorded two highly praised albums of devotional Yoga chant in the kirtan style of India.
Embracing Sacred Activism as his credo, Michael is currently a leading spokesman for the establishment of a new global court of human rights. Recognizing the urgent need for a revival of the spirit of Chivalry expressed in Sacred Activism, Michael lectures publicly worldwide on Sacred Activism, human rights, and the restoration of the Code of Chivalry. He is the founding director of The Sacred Academy of Geo-Energetics, or SAGE, based in Crestone, Colorado.
Interview Bullet Points: