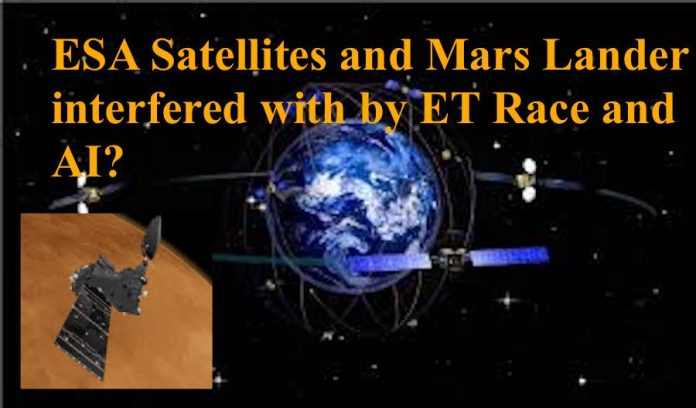 When will they stop lying?  Best to learn to read between the lines to tap into what is really going on…

Take a look at this article regarding the recent failure of “clocks” on the ESA Galileo satellites they are endeavoring to put into space.  And see also the mention at the bottom regarding their Mars lander that “crashed” on to the surface of the planet.  This is likely no accident but the result of a space war that took down the craft since we know that Mars is a planet with constant territorial disputes between at least one “ET” race and the American Secret Space Program.

This statement is laughable in its utter lack of saying anything:

“However, we are not blind… If this failure has some systematic reason we have to be careful” not to place more flawed clocks in space, he said.”  –ESA director general Jan Woerner according to this article:

We also learn from this article that the ESA satellite efforts have taken ‘more than 17 years and triple the budget’ to get off the ground.  Literally.  This recent sabotage of the 9 clocks on the satellites would seem to be a warning issued by way of an Artificial intelligence it seems to me.  Although possible targeting by craft based or particle beam weapons aimed either by a competing space program, likely run by the American side is also a possible culprit for this maneuver.  To be blunt, is someone is warning the Europeans not to try to ‘go it on their own’ outside of the primary space program operated by the British-Americans-Australians?

You can also see how the efforts of various countries along with the so-called commercial space endeavors by independent companies such as Elon Musk and others would pose a threat to the primary Secret Space Program operated by the Americans and their allies.  Those ‘allies’ being space races such as Reptilians, Nordics, Raptors and many others according to my whistleblowers.  The recent sabotage of the Elon Musk SpaceX launch being a case in point.  It’s time they start reporting more openly about the real space war going on both on and off this planet and the real players involved.