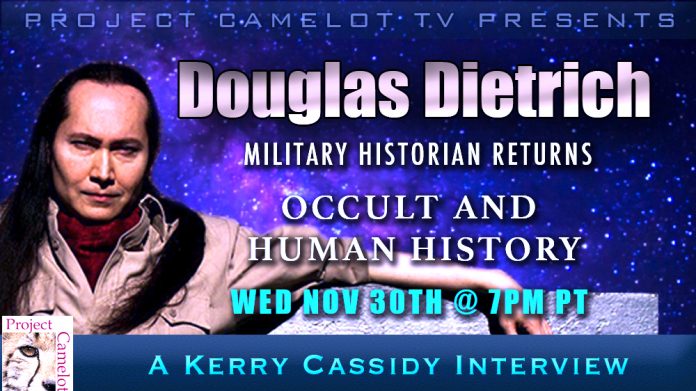 Douglas Dietrich,  returns to continue our wide ranging discussion.  We will discuss among other things…

Roswell
Trump/ election
mind control and project blue beam
recent video mention by Simon Parkes that Max Spiers may have run into Aquino in person a day or two before his death? Listen here at approx 1:30 :
www.youtube.com/watch?v=7j2GRDx9sG8

Douglas was Department of Defense research librarian for a decade, responsible for incinerating highly classified materials on critical historical topics such as Pearl Harbor, Roswell, Vietnam, the different ethno-national holocausts, as well as documents exposing the reality behind vampires, zombies, Soviet psychic warfare, and other occult phenomena. Volumes of notes pertaining to Tesla, H.P. Lovecraft, L. Ron Hubbard, the Vatican and United Nations were destroyed, along with reams of reports detailing everything from military drug operations to CIA mind control. Records plundered from both allied and enemy governments articulated the hidden objectives of modern mass movements such as Nazism, Zionism, Islamicism, and other ideologies. Douglas’ post was the San Francisco Presidio, which was seething with Satanism, child abuse, and controversial human medical experimentation. An abortive assassination plot on presidential candidate Bill Clinton was even organized. Since base closure, Douglas’ technical background in military reference has led to startling professional insights into geopolitics, the current demographic apocalypse, and the Medical-Industrial Complex’s thanatizing our future. Deceptions unleashed generations ago by American elites have warped our perception of reality. “Now is the time for total disclosure.” — Douglas Dietrich