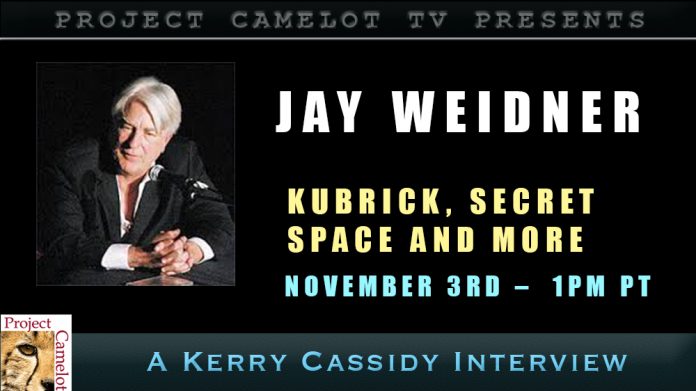 EXCELLENT NOT TO BE MISSED INFO!  JAY WEIDNER RE KUBRICK, SECRET SPACE AND MORE…NOW ON YOUTUBE

Jay Weidner (Bio from his site)

Called by Wired Magazine an “authority on the hermetic and alchemical traditions,” Jay Weidner is a renowned filmmaker, author and scholar. Considered to be a ‘modern-day Indiana Jones’ for his ongoing worldwide quests to find clues to mankind’s spiritual destiny via ancient societies and artifacts, his body of work offers great insight into the circumstances that have led to the current global crisis. He is writer/director of the new feature film, The Last Avatar, director of the critically acclaimed documentary, Infinity: The Ultimate Trip, Journey Beyond Death and writer/director of the documentary series on the work of Stanley Kubrick, Kubrick’s Odyssey and Beyond the Infinite.

In 1991, Jay joined KCMU Public Radio in Seattle. He hosted the six-hour weekly interview program, Mind Over Matters, and was also the Public Affairs Director. In 1996, Jay became one of the first employees of a start up company called Gaiam for which he was the Video Production Development Director until he departed in 2000.

In 2000, he founded Sacred Mysteries together with his wife, Sharron Rose. He has directed 15 films in the current Sacred Mysteries DVD Collection including Secrets of Alchemy, Artmind, Healing the Luminous Body, Quantum Astrology, Sophia Returning and more.

Since 2012, Jay has been Director of Original Programming for Gaiam TV,

In addition, he continues to be a featured guest on popular radio shows such as Rense, Red Ice, Freeman Fly, Coast to Coast AM, Veritas, etc.