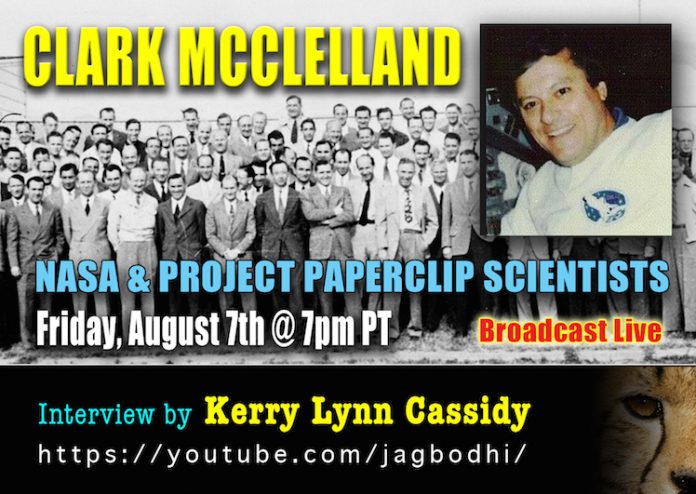 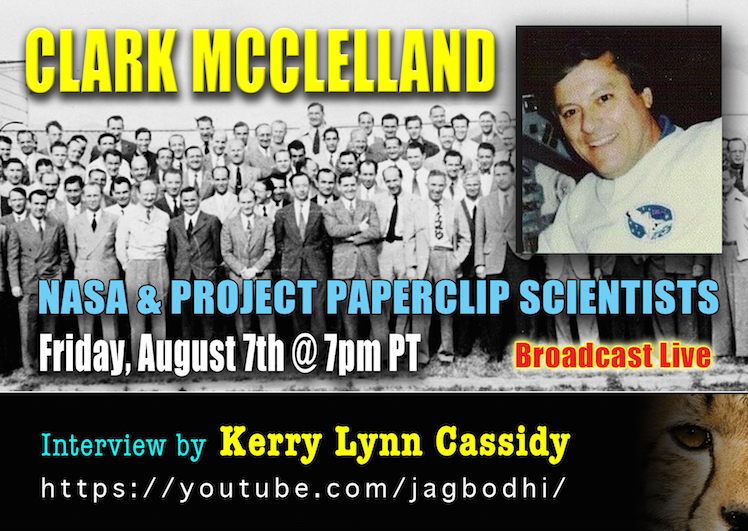 This is another amazing interview with Clark McClelland, NASA engineer and technical assistant on the Apollo missions. He talks about an incoming planetary body, or STAR being towed along behind what he calls a DYSON SPHERE containing a race of beings… Possibly from Aldebaran and headed into our solar system.

He talks at length about Wernher von Braun, the fact that the beings from Aldebaran are here and have been here working in our space program and supplying advanced technology to the Germans during WWII…

He again refers to the nine foot tall humanoid being spotted on the space shuttle via close circuit camera giving our astronauts orders using hand motions… and he is backed up in his testimony, by at least 2 other NASA employees.

He also talks about inner Earth and what really happened to Hitler. This is great stuff.

Go here to read about Clark’s background, his work on the Apollo programs and other space shuttle missions. This link will take you to the chapter we are discussing …Chapter 28 from the Book “Stargate Chronicles”: My Association with German Scientists at Cape Canaveral and Kennedy Space Center – By Clark C. M Clelland www.stargate-chronicles.com/web/
Please help support Clark’s important work: www.stargate-chronicles.com/site/about-clark-mcclelland/

He has lectured at many national universities including Notre Dame, Penn State, Ohio State, Berea, Montana State University, New York University, Idaho State, Embry-Riddle Aeronautical University and others too numerous to mention. On several occasions, he was requested by students and faculty to bring his unique topic to their campus as an elective course, although his work at Kennedy Space Center at the time overruled his acceptance.

Clark McClelland’s long association with the UFO phenomenon has followed him throughout his aerospace career. In 1958 he was assigned to the national space program at Cape Canaveral, Florida, and helped launch or viewed 679 rockets and spacecraft. In addition to being an Aerospace Engineer and Technical Assistant to the Apollo Program Manager during the Apollo moon landings, McClelland and other SpaceCraft Operators did extensive technical checkout of simulated flights and mission objectives of the various shuttles to assure orbital success and the personal safety of the astronauts.

McClelland knew many of the astronauts who perished during the Challenger disaster and certainly did all he could to keep each shuttle from such a repeat accident. He has held important positions involving such manned projects as Mercury, Gemini, and Apollo lunar landings, Skylab, the Space Shuttle and the Space Station. He was assigned to the cockpit of the Space Shuttle missions as a SpaceCraft Operator (Ground Test Astronaut). If anyone knows what is going on in space, with humans or otherwise, it is McClelland

In 1960, Major Donald E Keyhoe, the International Director of the National Investigations Committee on Aerial Phenomena (NICAP) selected McClelland to be Director for the Kennedy Space Center and central Florida region. His unit members included two NASA Astronaut Flight Surgeons, many engineers, scientists and mathematicians as consultants and investigators. Later, he was chosen as the Mutual UFO Network (MUFON) Director at the KSC and served concurrently as Assistant State Director for Florida.

McClelland’s name is on three commemorative monuments, the Mercury, Gemini, and Apollo missions – – – His name will be on the Space Shuttle, International Space Station and the Deep Space Missions monuments in the future. (Bio reprinted here from Clark’s website : www.stargate-chronicles.com/site/about-clark-mcclelland/