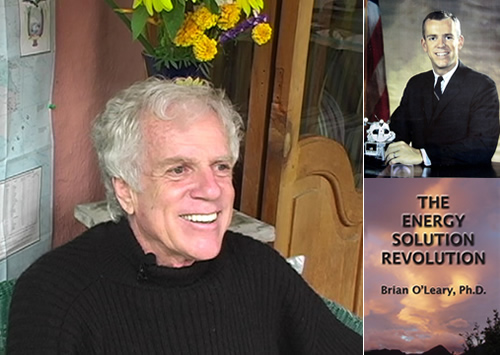 This is further anecdotal testimony regarding the efforts of the military industrial complex to disappear and discredit the former NASA astronaut, Brian O’Leary, who we had the honor of interviewing back in 2009.  It is important for those out there who have difficulty believing anything unless they see paper documentation as “evidence” to realize that documents of whistleblowers are often purposely lost, misplaced, altered, destroyed or otherwise hidden from the public in order to discredit the individual truth teller.

Brian O’Leary, Bruce Murray, the Face on Mars and a failed attempt by humble me to push humankind along to its graduation (Commencement Day).

My warm greetings to all followers of Project Camelot. It is an honor for me to contribute here a few words of personal testimony.

I am the “very bright senior honors physics student” from Caltech that the sadly deceased Brian O’Leary mentions in that beautiful interview by Kerry Cassidy during his last days at his retreat in Vilcabamba, Ecuador.

But first a little bit of background.

Bruce Murray , also deceased, was director of JPL when NASA/JPL released the first picture of the Face on Mars from the Cydonia region in late July 1976. He also cofounded The Planetary Society with Carl Sagan, and on Sagan’s death assumed its Presidency for a few years.

I was studying at Caltech and hoped to graduate in 1997. However, I was caught seriously cheating in one course, and had to take a few months off as fair punishment. However, I returned to that illustrious school (which manages the JPL lab for NASA) at the start of 1998, eager to work hard to graduate in June of that year. I don’t recall cheating since.

I met Brian O’Leary in the LA area in early 1998, and thought it’d be so awesome if I could bring him as Commencement speaker at Caltech that year . I would make it my own Graduation present! I began to gradually announce over campus my idea of bringing O’Leary as a Commencement speaker.

It must be said that the Mars Global Surveyor image of the Face on Mars was taken in April 1998: it was released as the image that was supposed to “scotch this thing” once and for all (as a JPL spokesman was heard saying), in order to discredit the increasingly popular idea that the Cydonia feature was a giant sculpture of a human(oid) face on Mars. By then, I had already begun announcing that O’Leary would come to speak at Caltech, obviously about the Face on Mars. Someone in JPL/NASA had heard of my intentions and wanted to preempt my move?

Then, in the spring of 1998 (not in 2000 as O’Leary says inexactly in the interview), I happened to leave one of my (very provocative) fliers advertising Brian O’Leary and what I hoped was his tentative upcoming talk, in the home mailbox of Bruce Murray. Bruce came unglued and summoned me to his office through the Dean. Bruce said that O’Leary’s resume as I had advertised it in my flier was untruthful and that Brian had never worked there at the Mariner 10 mission in the capacity that I attributed to him. Bruce then produced the Mariner 10 official book from his shelf and, to his embarrassment, lo and behold, O’Leary was indeed listed there as deputy team leader of the Mariner 10 Venus-Mercury TV Science Team as I had advertised. Furious and caught red-handed, Bruce Murray partly relented and agreed to O’Leary’s coming to Caltech, but O’Leary’s talk was clearly relegated to the category of an unofficial venue. Brian was certainly not to be the Commencement Speaker for that June when I was hoping to graduate.

Nevertheless, I did a poster with a take-off on the movie Independence Day, turning it into a hope theme rather than a fear theme, replacing the title “Independence Day” by “Commencement Day”, and the image of New York by that of Pasadena, with the giant mothership’s beam coming down on Caltech where O’Leary was to speak.

O’Leary’s talk did indeed take place two days after my Commencement in 1998: it was, however, boycotted by everyone at the Caltech faculty, despite my having plastered the campus with my creative fliers and the poster.