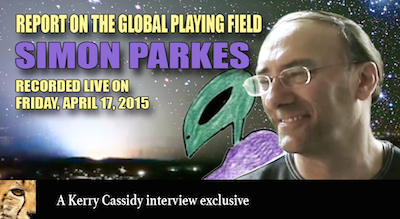 Originally broadcast live and now available here on Youtube. I interviewed Simon Parkes about his latest Newsletter (see below) regarding what’s happening right now on the global playing field: PUTIN, HOW THE BRITS ATTEMPTED TO START WWIII, THE GLOBAL FINANCIAL RESET, RECENT ATTEMPTED ASSASSINATION ATTEMPTS ON PUTIN AND OBAMA, CERN and more!

Special Note: Just a few hours prior to the live broadcast Simon’s computer was destroyed. He went out and bought a new one and was still unable to get online to use skype. We had to resort to old tech.. So I called him on a landline.  Clearly they do not want this information out there! Please distribute widely!

A SECOND INTERVIEW WITH SIMON PARKES

(To view the first interview with Simon Parkes recorded back in August 2014 go here or see below embedded video:  projectcamelotportal.com/component/k2/3783-simon-parkes-british-councillor )

It is with deep regret that I can no longer receive emails with questions.  If you have questions for me then you should book a 30 minute consultation.


Welcome to the April edition of my newsletter.  The last 6 weeks have seen some of the greatest activities on this planet perhaps not seen for the last 20 years.

In March it may be remembered that President Putin disappeared for some ten days and I can now reveal what he did.  Apart from meeting Chinese officials and formerly signing the BRICS agreement, the elite American government personnel along with their allies in UK rerouted sensitive encrypted information along the VPN line in the Ukraine.  This information contained, amongst others, reports from the atomic energy commission and Britain’s spy centre known as GCHQ.  This information was fabricated and it was hoped that the Russian secret service would intercept these transmissions.  Encoded in this information was the false report that Britain’s nuclear submarine fleet had targeted their missiles on Russia,  I am left with no other conclusion than to believe that this was an attempt to start a 3rd world war.  Thank god President Putin realised the trick and did not respond militarily, however this was the final act that convinced him to sign the BRICS agreement – for up until now he had not formally signed.  This is why he nationalized the main bank in Russia, because he required a state run bank to trade in the new currency which of course will be gold backed.  Within his inner circle he formed a special committee of between 3 and 5 people who now are very much involved in rolling out of the alternative gold backed system. I understand President Putin had a recent addition to his family and I congratulate him.

On a far more sinister note an arm of the Zionist regime sent a hit squad in an attempt to assassinate President Putin, this was thwarted and at the same time a hit squad was despatched to take out President Obama.  That is why some 10 members of the senate were recently arrested – because this plot also failed.  So now we begin to see why America at its highest levels is fearful of the new gold backed currency.  With China, Switzerland, India, Brazil, potentially Hungary, Iceland and even the United Kingdom wishing to join, America is being isolated economically.

One of the major reasons for the CIA instigating revolution in Ukraine was a pay back to certain Zionist factions.  When America came off the gold standard the Rothschild’s were asked to value America, as of January this year America has exceeded its debt by 22 times which means its 22 times overspent compared to its value.  This has a devastating impact on imported goods where one country who imports does not have gold backed currency while the other country that exports has.  We can all see the cliff edge that America now balances on, it is for this reason that I feel, barring dramatic intervention, the period of July to October could be crucial.

In relation to the CERN device after 2 years of developmental work and non operation the final part of the 26 mile extension was being put into place when damage occurred to the tubing.  This has put back the operation of the device yet again and we await with interest to see the development.  Many people are making predictions about the Planet X, I certainly am of the opinion that a large foreign body will come close to the earth in the very near future although it will not strike the earth.  The CERN device could be used against such an object.  In short let us imagine a bank and the bank manager goes on holiday leaving the bank employees to usurp their position then the bank manager returns to take charge of the bank and the employees try to stop him.  This is a rather a light hearted analogy of the situation on planet earth at the present time.

There have over the recent years been so many aeroplane crashes and these are terribly tragic, the most recent was the German aeroplane, I wonder what message was being sent to the German government.

This is the time now to congratulate Fran on the creation of the facebook page.  I’m utterly delighted that so many have started sorting themselves into starseed families, but let us not forget that we are all equal and no one race is more superior than another.  Thank you Fran from all of us.

On another note I am looking to form a small dedicated group which will not meet on facebook, if anyone feels that they wish to take an ACTIVE roll in helping humanity then please email simonparkes7@gmail.com and in the subject line please title the email with ‘Group’, failure to follow this will result in the email being lost.  There are many people who I’ve met who have astounded me with their kindness compassion and truthfulness and their determination to do something positive for the benefit of others.  This group that I would like to establish will have that as its overriding goal.

Much strength, much hope, much love
Simon

To view my original interview with Simon Parkes recorded in person back in August 2014 go here: