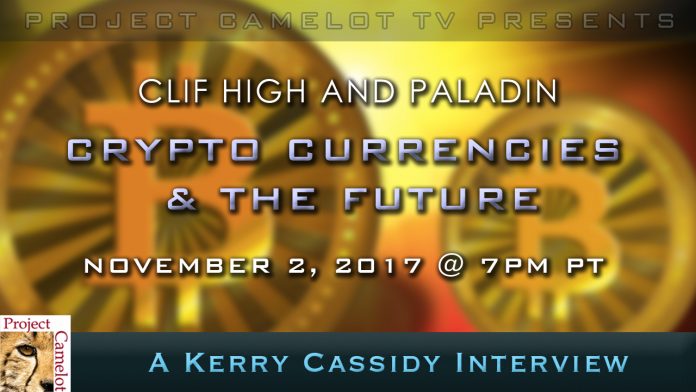 This is a roundtable discussion with Clif High and Paladin on Thursday, November 2nd regarding Crypto Currencies and the Future.  We also discuss AI (Artificial Intelligence) and other aspects of the financial system and the impact of the deep state.

For bio(s) of guests see below.

CLIF HIGH has a patent on computer-assisted reading technology which allows reading from computer screens at up to 2000 words per minute. Reaching into other areas of hidden potential within language use by humans, he has been developing a system of software internet agents (like search engines use) and other proprietary processing methods to predict future events. The software project, begun in 1997, captures near-real-time changes in language patterns within internet discussions. Then, employing radical linguistic techniques of his own devising, he develops a model which anticipates future events with some seeming accuracy. The processing has, at its core, a method of assigning emotional values to complex content and time carry-values to predict changes in future behavior based on how people are using language now.

The web bot project has continued to give archetype descriptors of future events such as the anthrax attack in Washington, the crash of American 587, the Columbia disaster, the Northeast Power outage, the Banda Aceh earthquake and most recently the flooding of the Red River. As a continuing project, reports are offered from the extracted archetype information at his web site, halfpasthuman.com

PALADIN is a forensic financial investigator, a licensed Private Investigator and assisted with in the OJ Simpson trial investigation.  He is a key member of a group called The White Hats.  whitehatsreport.com/

“…We are a group who have banded together to assist in the world’s awakening by reporting truth and exposing our fraudulent corporate government. We bring forth information that the mainstream media (MSM) refuses to report, and our news comes from high level “inside” intelligence sources.

IF OUR GOVERNMENT REALLY WANTS TO KEEP CLASSIFIED SECRETS, THEY SHOULD BE KEPT IN THE SAME PLACE THAT OBAMA’S COLLEGE TRANSCRIPTS AND BIRTH CERTIFICATE ARE KEPT.”