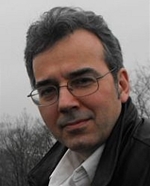 Richard Dolan is among the world's most prominent researchers and historians of UFOs.

He is the author of two volumes of history, UFOs and the National Security State, as well as an analysis of the future, A.D. After Disclosure: The People’s Guide to Life After Contact.

He has also appeared on many specials for The History Channel, SyFy, BBC, and elsewhere, including hosting for the TV series SciFi Investigates.

“Anthony is the first Investigative Researhcer to 'ever' find U.S. Government Property atop the Archuleta Mesa (Dulce, NM), on what is soveriegn land belonging to the Jicarilla Apache nation, not the U.S. Government or Military. This is a clear indication that something is happening in Dulce.”

Anthony F. Sanchez received his BSc. in Computer Information Systems from Western Governors University of Salt Lake City, UT. In addition to being a Software Consultant for the State of California through his own company, Anthony has been employed for 16 years as a Software Engineer working for 3Com, Intel, Acer, Netscape Communications, and Hewlett Packard performing high level software development supporting scientific engineering and business intelligence projects.

He became interested in UFOs back in 1989, at the time Area 51 surfaced as a public phenomenon. Since 2000 he has researched the subject matter thoroughly employing various scientific methods and hands on approaches, thus compiling over 20 years worth of UFO related research data.

For the purposes of augmenting his knowledge on Human Origins, Anthony has also studied in detail, ancient Hebrew religious texts such as the Old Testament Bible, and gospels from the the Dead Sea Scrolls such as the 'book of Giants', and 'book of Enoch'. He has also studied famous Sumerian-Babylonian translations such as the Enuma Elish, and the Atra-Hasis as well as numerous Akkadian Mesopotamian cylinder seals and Akkadian cuneiform inscriptions.

Each year he is a regular visitor to the deserts of the American Southwest, visiting crash sites conducting interviews, and performing scientific field work. His most recent interviews include the likes of fellow investigative UFO researchers, Norio Hayakawa, and Joerg Arnu. His work represents an unbiased and impartial reporting style ensuring he uncovers every aspect of every story.

Anthony F. Sanchez is a citizen of the U.S. and lives in Northern California.

You can send email to Anthony at anthony@ufohighway.com