LETTER FROM AN ACADEMIC – AFTERSHOCKS NOT REPORTED

“I am an academic in {REMOVED} and follow your work with appreciation and interest.

I noted the earthquake yesterday in B.C. and your recent comments and concerns re: manipulation of information by USGS.

I am including here proof that information re: aftershocks (including a 4.9) from this earthquake is not being reported by USGS or the official Canadian earthquake site maintained by Natural Resources Canada.

Please post as you wish and/or forward to dutchsinse.

CBC news posted the following story at 12:59 pm PDT on Sept. 9th although may have been subsequently updated.

Note the following comment by seismologist Garry Rogers part way through the article, under the subheading “Aftershocks expected”

‘Rogers added people in the area shouldn’t be surprised if they feel smaller trembles in the coming week. “There’s a certainty there will be aftershocks,” he said. “Already, we’ve had half a dozen, with the largest being 4.9. But there’s going to be hundreds of aftershocks … potentially measured over the next week.”‘

There is also reference to the 4.9 aftershock (one among “dozens of aftershocks” recorded by “officials”) in the following CBC video newsclip – I believe this was shown on the 6 pm evening news yesterday in Vancouver.

At 00:23 the newscaster states that “officials recorded dozens of aftershocks”. Later in the video the 4.9 aftershock is referenced in particular (at 1:40).

CTV news also posted a story at 9:21 EDT this morning that refers to the 4.9 aftershock attested by Garry Rogers:

“Garry Rogers of the Geological Survey of Canada says there will be hundreds of aftershocks. He says there’s already been at least a half dozen, the largest of them a 4.9 tremor.”

But check out the USGS earthquake list. See attached image file for a snapshot of the list updated as of 11 am EDT this morning: Saturday, 10 Sept 2011 – no aftershock(s) shown.

Also see the Earthquake Canada section of the Natural Resources Canada (NRC) site (where Rogers is a seismologist). I have also attached an image file of the list for Southwestern BC, which I snapped at 11:01 am EDT, Saturday, 10 Sept 2011. No aftershocks shown. 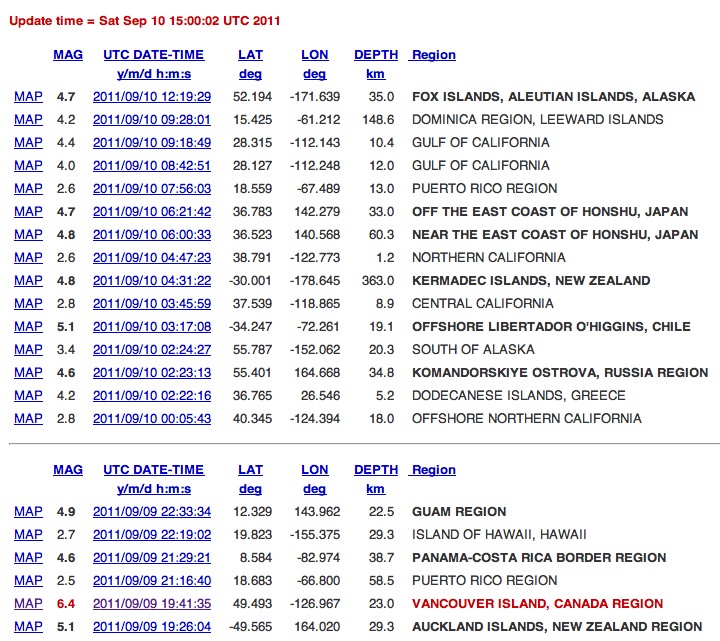 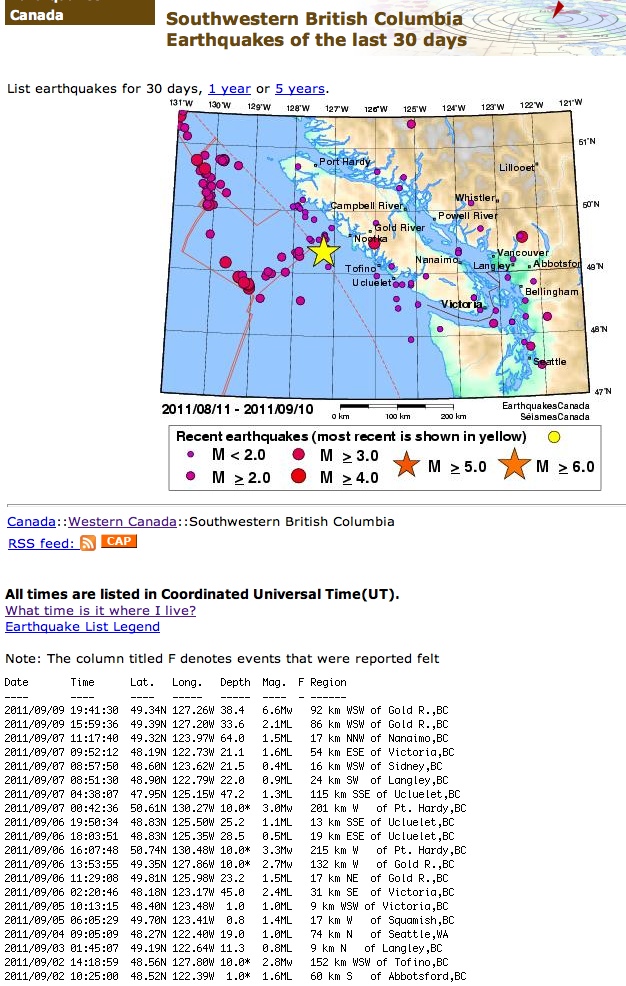 All the best with your upcoming Awake & Aware 2011 Conference (I hope to watch from afar via livestream).

And for more proof see this article