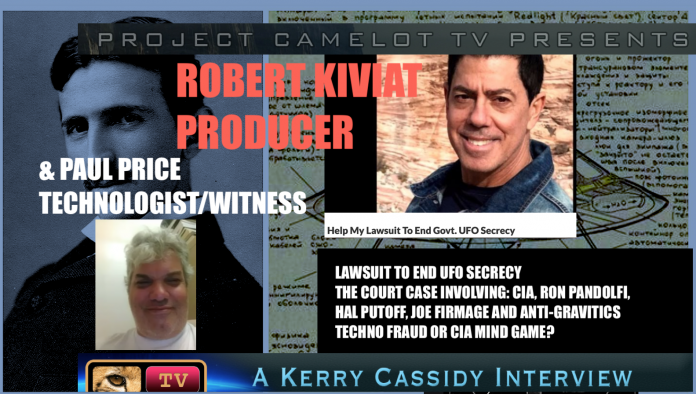 Regarding:  Supposed CIA “technoscam” used the Firmage Corporation …MANY ONE/INTERNASA,  VIA USWEB to raise funds with a false anti-gravity technology.  Bob Kiviat is an injured party…having been hired to produce media, shows, documentaries and other promotional materials to support this scam and never paid the $300,000 he was supposed to be paid.

MY COMMENT:   This reeks like a CIA dog and pony show where the players are all on the same side and this will never go to trial in my view.  The question is how can you charge the CIA with acting as the CIA has always acted.  They create mind-controlled, operations psi-ops.  The investors who lost a few million are strangely not involved in this lawsuit. At the center of validating the technology originally is HAL PUTOFF who is at the center of To the Stars Academy and many other CIA operations involved with so-called DISCLOSURE — nondisclosure game playing.

<![CDATA[ KAL KORFF is often called “a writing and production machine,” and with more than 10,000 articles to his credit written on a wide variety of subjects, several books; hundreds of videos and numerous media appearances, it is understandable why.

Kal’s Korner covers everything from Politics to the Paranormal.

Kal Korff has had an extremely diverse professional career. He is a longtime, internationally known accredited Analyst, Broadcaster, Columnist, Computing Systems Process Specialist in Enterprise Architecture, Counterterrorism Analyst and Specialist; Executive Producer, Investigative Journalist, IT Specialist, K-5 School Principal, Lecturer, Senior Systems Analyst Level III, Human Interface and Software Developer and Teacher whose articles, broadcasts and expertise have been sought by governments and private companies for decades. His research projects, results and various works have been featured in the global media on four continents: the United States of America and Canada, Europe, Middle East and in Asia.

Kal Korff has devoted his life to focusing on three major goals:

1. Conducting original research.
2. Finish research left incomplete by others, regardless of the reason(s).
3. Analyzing and studying existing issues, then finding new or original solutions to them.

Each of Kal’s projects, books, products or causes falls within one or more of these three categories, or he’s likely not interested.

The results of this research and studies are always released to the public or clients in various forms so that people are empowered to examine the data and decide issues for themselves, to help them separate fact from fiction.

An American by nationality, Kal lives in the country of India and has traveled to and/or lived in 27 countries on four different continents – North America, Europe, Middle East and Asia.

Since 2016, his investigative journalism reports, full-page Specials, and numerous other articles have frequently appeared in Daily World, which is India’s first international newspaper, and on their online television network, Daily World TV. Prior to this, for four years Kal’s articles, more than 2,000 of them, which covered everything from international affairs to travel, technology and American politics were published in the English language newspaper Daily Post, as well as in his popular written column, Kal’s Korner.

Kal Korff is also the author of several books, including non-fiction exposes such as: In Russia’s Orbit: Why Obama, Governments, Spied on Trump and Associates and The Roswell UFO Crash: What They Don’t Want You to Know, which remains the bestselling expose of all time concerning the mythical Roswell “UFO crash” of 1947. Some of his other books include Spaceship of the Pleiades – The Billy Meier Story, Annie Jacobsen’s Area 51 Book Scandal, The CIA’s Secret Torture Files The Secret FBI Cattle…