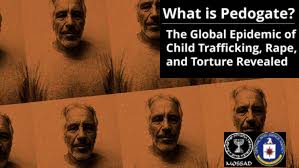 The only way Epstein got caught and then suicided (killed or fake killed and then delivered into the protection of the shadow government) is if they (the dark magicians) decided to throw him to the wolves FOR A REASON… They protect their own until they don’t …because they go off the reservation in some way, get too full of themselves and stop following orders and/or get sloppy or cross some kind of line and anger someone high up in the food chain. Especially now when the Trump/Navy side are looking to INDICT some of their worse members they recognize they need a scapegoat. That scapegoat will be their sacrifice to save the higher-ups from scrutiny and exposure.

So one can be sure that Epstein did something to make himself expendable in ‘their eyes” and so went on the list of those they could use when the time came to level the playing field and draw fire away from the inner circle of the whole Satanic/Pedophile/Human trafficking/Sex slavery rings … Needless to say, the noose has been tightening around the perpetrators of this worldwide network at this time.  And the indictments are real (up to a point).

Most unfortunately there also had to be a deal struck between the Trump/Navy group now running things in the U.S. (and possibly in the Secret Space Program) and the satanic side backed by the Greys, Reptoids, and Dracos, also known as the Luciferian Rebellion.  Whether the deal was to do a staged fake heart attack (temporarily) to appear dead for long enough to get his body out of the prison or to substitute a clone or double or fake it for the cameras so he could be moved out of the eye of the public, or what depends on the nature of the deal.  But one can easily see that both sides had to be willing to ALLOW the other to intervene in order to make the whole scapegoat scenario possible.

William Barr played his part well expressing outrage over the false idea that Epstein killed himself in jail.  And highlighting the slovenly nature of the Manhattan jail.  But it is a misdirect because if the Trump side wanted Epstein protected then not even a remote suicide (via remote influencing or attack) would have been allowed.

There is some deal being brokered behind the scenes on this guaranteed.  And this may have been the plan all along.  Because like it or not, both sides have a desire to hide at least some of the high-level operations that fund the dark side and portion of the hidden world government detailed to some degree here:

Because those very same operations:  drugs, weapons, human trafficking, sex slavery, pedophilia and more are the tools by which it controls those who do it’s bidding and funnel money into the coffers to keep them operational as well as fund the secret space program.

The cameras installed for blackmailing all who visited the island creates an insurance policy to maintain control of those officials who fall into the web of sexual entrapment managed by agent Epstein (reportedly a Mossad agent but possibly also CIA).

Under pressure from the sector currently run by the Trump network which includes a certain portion of the military especially the Navy, the Illuminati/ Luciferian rebellion had to be feeling the heat.  So a sacrificial victim (Epstein) was chosen.  Likely he was a liability because of having been tagged once in Florida which weakened his usefulness and then possibly because those implicated have also been slated for exposure.  All in order to hide the real operations (network) that is so large that it would scandalize the world not to mention the US citizens…

So Epstein becomes the “pearl” (as he was seen by his controllers) thrown before swine (the masses) in order to take the heat off the top levels and central network.  This network inevitably will reach into law enforcement and intel agencies specifically CIA and FBI as enablers at the very least and instigators on another level.  This is business as usual.

Humans are prey.  This is the takeaway people need to deal with from all of this.  Your government is out to get you and you are the food, sex object and cannon fodder they use to promote anything and everything that the dark side wants to make happen.  And most, unfortunately, the predator is not only other humans but off-world and hidden entities and beings who feed on you as a matter of simple survival.

This gets into what the human vehicle is as a carbon-based life form that generates orgone (known as kundalini in the East) a form of energy that by the way, can also allow for time travel, opening portals, and fueling space travel.  Of course, yogis in the East have always known this and kept silent about it for eons…not so holy men it seems.

So the dirty secret here is that both sides are implicated in this deep state/secret government investigation.  And part of the reason for the secrecy around the indictments is that there is likely no way to limit the damage once the truth starts to out.  Everyone on both sides will be exposed.  Because it is a modus operandi…way of doing business that goes back to the mob, Hitler and long before that on this planet.

So who you gonna call?

Note:  also see CIA agent Gordon Duff’s article that came out on the day Epstein was said to have killed himself, linking him to the MOSSAD, ISRAEL and stolen nuclear secrets.  Substitute ALIEN for nuclear because this is A CODE that is used by certain intelligence agents in news articles to send a message to other governments and agencies worldwide (as well as militaries) that what is going down with Epstein links to the ANUNNAKI in Israel, (war over alien tech) and domination in the Middle East and blackmailing of key politicians and power players operating by the Mossad.

The way to read a Gordon Duff article is to always substitute “alien” for “nuclear” and isolate each sentence to separate the lies from the surprising truth when he chooses to tell it.

SEE MY 2-part INTERVIEW WITH WILLIAM TOMPKINS (below) and know that he was silenced when he tried to reveal the extent of the Pedogate operations… “it’s far worse than you can imagine” he said to me during our 3-hour interview… And the Navy knows all about it but they don’t want it exposed…yet.

Note:  The topic of Pedogate starts in Part two at 53:55 minutes…