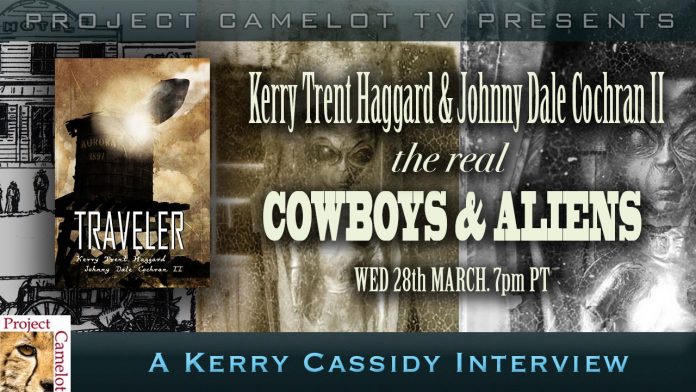 WEDNESDAY, 7PM PT:  I interview Kerry Trent Haggard and Johnny Dale Cochran II about their new book THE TRAVELER that deals with a mysterious crash of an alien ship in Aurora, Texas in 1897.

ABOUT THE BOOK and Authors – by Kerry Trent Haggard and Johnny Dale Cochran II: (see below)

TRAVELER is a two fold story. The 1897 sections are based on documented historical facts detailing the Aurora, Texas single alien crash in the early morning of April 17th, 1897. Written in the past tense, they are, however, my own interpretation of how the actual events may have played out in the old west at the close of the 19th century. I tried to imagine how the good people of a small south-western town may react to such an unprecedented happening. How they may deal with and comprehend the phenomenon of an honest to goodness extraterrestrial craft falling from the heavens in a time when nothing but birds ruled the sky. How they may come together to cope with such an occurrence and its aftermath not only physically but mentally and how it would go down in their history. Reported in both the Dallas Morning News and Fort Worth Observer, stories concerning the event were subsequently handed down from elders of the time. Some accounts swore it was the most astonishing thing to have ever happened in the community.

Others claimed it was all a lie, made up to try and save a town that was in serious trouble due to fire, crop failure and epidemic. The good people of Aurora today must feel certain the story is true. In the local cemetery there is an official monument detailing the graveyard’s history which mentions the event. Placed there by the Texas Historical Commission in 1976, the inscription concerning the alien is as follows, “This site is also well known because of the legend that a spaceship crashed nearby in 1897 and the pilot, killed in the crash, was buried here.” Taken from real life occurrences and situations from our vastly different pasts for the purpose of creating this novel and screenplay, the 1997 sections written in the present tense were created by Odessa, Texas native, Johnny Cochran and I during the summer of 2015. The two backgrounds combined tell some pretty wild accounts to give the reader an entertaining fictional tale based on a substantial historical event. Many of the stories included in this work such as the railroad tie thrown in the road, the angry Pomeranian locked in the van, the misguided hand grenade and the visit from the reptiles truly took place!

A devoted antique car collector, judge and restorer for the better part of 25 years, Kerry Trent Haggard is the founder, writer and host of “Wheels of the Past” productions based in Beaver Falls, PA. Relocating there to begin the project from his home state of Georgia in 2017, currently under production in the Pittsburgh area, “Wheels of the Past” is a historically accurate and entertaining series devoted to the history and preservation of classic cars, trucks and motorcycles which have informative stories to tell. Working as company buyer for SMS Auto Fabrics of Canby Oregon from 1989 till the mid 2000s, Haggard personally built several national award winning AACA and Early V-8 show cars including a 1924 Ford Model T Touring car, 1961 Ford Galaxy Starliner and a 1938 Ford DeLuxe Coupe which won “Best Pre WWII Ford in the Nation” in 2000. A long time enthusiast of classic horror and UFOs, Kerry first learned of the Aurora alien crash from friend and Texas native John Cochran in the summer of 2015. Due to an incident which Kerry witnessed during his childhood of a flying saucer landing in his small hometown, the story hit him with such passion that he and John spent the next several months working day and night to form an outline for a screenplay based on the fictional hunt for the buried extraterrestrial 100 years later. From there it grew into the novel you are holding. Bonnie’s editor Mr. Grail in the story is based on Kerry and the young boy Jo, on his grandson Kane.

Born July 14th 1970 in Odessa Texas the real Johnny Cochran from whom much of this story is based, including not only the Johnny character but Tombs as well, was raised in the country and grew up hunting and fishing and working as a rough and rowdy cowboy on local ranches. Graduating from Permian High School in 1988, he joined the United States Navy and became a corpsman serving his term with an honourable discharge. Following his stint in the Navy, he came home to West Texas to work in the oil fields where he now owns two successful businesses, an oil field supply company and an on location mechanic outfit. Through his businesses he has made many acquaintances, a few he calls friends and a select number that he considers Brothers. The father of six beautiful children, family and honour have always been of the utmost importance. With a lifelong love for old hot rods and motorcycles, John is a true friend, a free spirit and always up for a road trip.