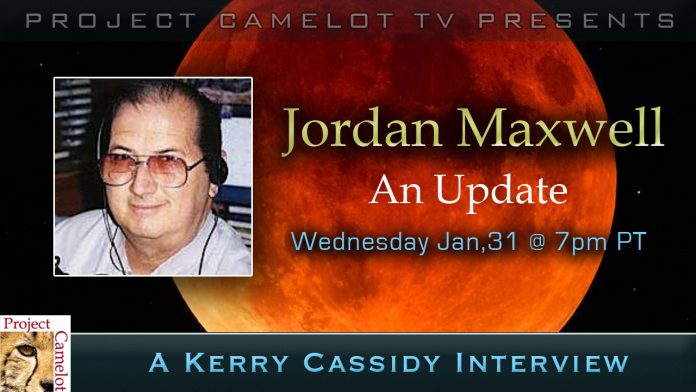 I will be chatting with Jordan Maxwell tonight at 7pm PT.

FOR MORE INFO ABOUT JORDAN o to Jordan’s website:  jordanmaxwellshow.com/blog/

Jordan Maxwell continues as a preeminent researcher and independent scholar in the field of occult / religious philosophy. His interest in these subjects began as far back as 1959. He served for three-and-a-half years as the Religion Editor of Truth Seeker Magazine, America’s oldest Freethought Journal (since 1873). His work exploring the hidden foundations of Western religions and secret societies creates enthusiastic responses from audiences around the world.

He has conducted dozens of intensive seminars; hosted his own radio talk shows; guested on more than 600 radio shows; and written, produced and appeared in numerous television shows and documentaries (including three two-hour specials for the CBS TV network, as well as the internationally acclaimed five-part Ancient Mystery Series) — all devoted to understanding ancient religions and their pervasive influence on world affairs today.

Considering the rapidly moving events of today, and the very real part hidden religious agendas play in our modern war-torn world, he feels these controversial subjects are not only interesting to explore, but too important to ignore! His extraordinary presentations includes documents and photographs seldom seen elsewhere.

* Astro-Theology
* Sexual Symbolism in World Religions
* Foundations of Modern-Day Religion
* Secret Societies and Toxic Religion
* World Mysteries: Ancient and Modern
* Ancient Symbols and Occult Emblems
* Ancient Sciences and Technology
* Hidden Bible Teachings and Mysteries
* The Sun in the History of Politics and Religion
* The Story Your Church Doesn’t Want You to Know
* Secret Societies and Their Influence on World Events

NOTE: Jordan Maxwell has been the preeminent researcher in studies of the Occult and religious philosophy for over 50 years, at the great expense of his personal life. Jordan says he never had a choice and was compelled to pursue his lifetime’s work.

Jordan’s motive was never monetary profit or gain, but rather a relentless pursuit of truth, which made him easy prey for a multitude of conniving, ruthless opportunists looking to make a quick buck off a lifetime’s worth of work and sacrifice. Being a preeminent researcher and independent scholar did not leave time to pursue being the consummate businessman, and particular self-serving characters took advantage of this as an opportunity to exploit.

Over the years, Jordan had a string of peculiar personalities come into his life, ostensibly offering help, only to find out later their true intent — take for themselves everything Jordan was trying to do. This caused Jordan severe economic harm, and made it very difficult for Jordan to obtain the necessities required to sustain life, let alone pay legal fees to defend his rights, but Jordan battled on for his name, image, and life’s work, and now he continues with his research and work.