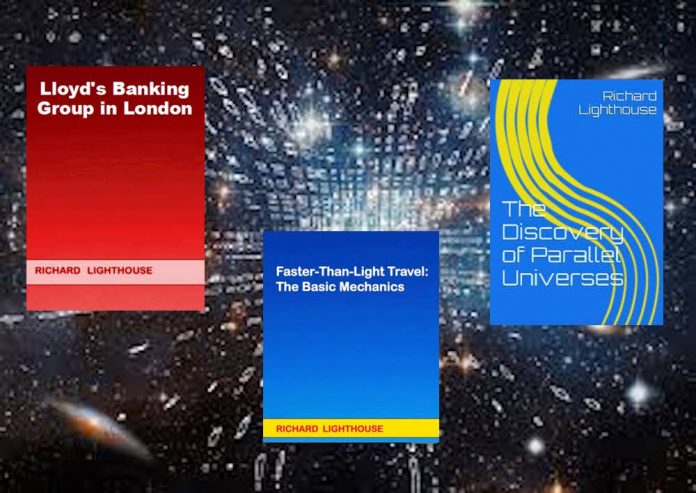 I am posting the following at the request of Richard Lighthouse.  This whistleblower info has not yet been vetted.  The references to the SETH MATERIAL and Jane Roberts is notable.

The following bio has been taken from his publication entitled “LLOYDS BANKING GROUP IN LONDON” by Richard Lighthouse.  Posted with permission from the author

“The author holds a Master of Science (M.S.) degree from Stanford University. He can be reached at: RLighthouse1 –at- fastmail point fm”

“I am a government whistleblower – see my ebooks about the criminal acts of the CIA and FBI. Readers are advised that the NSA may be blocking or restricting access to some of my ebooks, especially outside the United States. Readers are further advised that digital tracking tags may have been placed in my ebooks.  It may be best to download from Apple iBooks, if possible.  Note how slowly the jpg’s load into the ebook when viewing. The content of some ebooks may have been altered – still trying to monitor this.  If you have tried to contact me, it is possible that emails and phone calls are being blocked (Owenc787 at gmail) 713.three.zero.six.8287; 16930 County Road 831, Pearland, Texas, 77584.

Readers are advised to review the website drjudywood.com which provides compelling evidence about 9-11. Dr Judy Wood and Dr Morgan Reynolds, university professors, filed lawsuits against the US Government for fraud and conspiracy about 9-11. Dr Woods scientific presentation is available at youtube. Readers are also advised to see the movie “Sirius” by Dr Steven Greer, M.D. It is available for free on Netflix, where it is the #1 documentary, and to watch the youtube videos by the Honorable Paul Hellyer, former Canadian Minister of Defense.  He has a book titled, “The Money Mafia.”

Also, find my brief educational videos on youtube (Some have been blocked from the search engines).

For more than 4 years, this author has been stalked, harassed, and threatened by US Government agents from the CIA, FBI, and NSA – because of the content of these ebooks. My home has been broken into, repeatedly. In May 2014, my girlfriend was drugged and kidnapped from LaGuardia airport. This is not a joke. My computer, phone, and alarm system have been hacked, including those of my friends and family. It is truly sad and pathetic, these agencies have become criminal organizations. If something happens to me (disappearance, false criminal charges, sudden accident, etc. – my readers can be certain that the FBI and CIA were involved. In my opinion, the Council on Foreign Relations (CFR) is behind these criminal acts; David Rockefeller has been the CEO and Chairman for many years.”–Richard Lighthouse