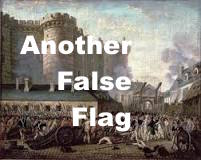 Apparently along with spoiling a British woman’s shopping expedition, this latest so called terror attack in Nice smacks of an orchestrated Illuminati hit against French “independence” from their agenda.

…”Toulouse, Charlie Hebdo, Bataclan, Magnanville and now Nice highlight how the country has been a frequent target.”–www.ibtimes.co.uk/attack-nice-france-comes-under-attack-again-truck-ploughs-into-crowd-1570718

Do not be deceived.  The storming of Bastille, theatrically replayed  by a truck plowing into a crowd now revealed to be full of explosives and gunmen.  The shooters either on board the truck or simply emerging from the crowd resulting in death of “mostly children”…

Another blood sacrifice on a significant day commemorating French independence.  Apparently the Charlie Hebdo and Bataclan attacks and purposeful flooding of the Seine hasn’t been enough to convince some portion of the higher levels of the feuding Illuminati or royals or government (?) to get on board the agenda.

More investigation needs to be done but the signs are clear.  False Flag.

More about Bastille:   bastille-day.com/history/storming-of-the-bastille-july-14-1789..”Bastille, a prison that was a symbol of the King’s absolute and arbitrary power.”