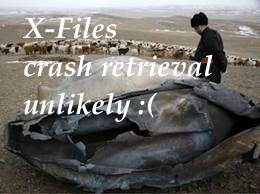 I had a sneaking suspicion X-Files was not really happening after watching the first 2 episodes.  I like everyone else was delighted to have Mulder and Scully back and was hoping that somehow over the past 10 years they might have learned something (I mean Chris Carter and the team)… Alas, no go.  Yes in the first 2 episodes they drop bits of clever dialog indicating they are aware of the surveillance society we all live under and they add a new clever journalist character who rants about all the right things with a straight face and delivery, but still, it had problems with the story lines and seemed a little like they were simply paying lip service to the latest trends and conspiracy truths out there. That was just the first hint that there was ‘trouble in river city’ so to speak.

Then there was the total lack of chemistry between Mulder and Scully, yes they are older and somehow have forgotten to get wiser in the meanwhile (not the fault of the actors this is has to do with poor writing).  And it’s stupid to think Scully is still a skeptic after being abducted and impregnated, to say nothing of the more recent find that she has alien blood (!) Still by the 2nd and 3rd episodes she seems to have forgotten all about that.  And Mulder never pursues the matter.  And what happened to their kid anyway?  Did I miss something?

Why is Mulder suddenly so skeptical? Is this supposed to show character “growth”?  So the writing staff are clearly not believers and they think we are all gonna just grow up and out of our delusion with aliens being real and the government coverup right?  How lame.  I so hoped they would have done their research this time and not devolve into silly horror themes that seemed to dominate the series years back.  I admit back then I turned off the episodes that just dealt with “horror” figuring they really couldn’t handle dealing with aliens and the real secret space program…And now here we are.

The 3rd Episode is impossibly lame and clearly laughing at itself so hard they forgot to even try and make the “monster” look real.  Instead we get a stupid hokey plot about a guy turning into a reptilian who’s actually losing his mind anyway so who cares?  What a disappointment.  It’s obvious it’s more than the SUIT that is pissing Mulder off.  He seems to really hate his part and want to get the hell off the set.  It’s also clear he can’t fathom why anyone would want to watch a show about aliens.  Quoting him from uk.news.yahoo.com/x-files-wardrobe-does-not-suit-david-duchovny-000248268.html

..”I didn’t want to wear a suit and tie, which is the f*****-up thing about having to play Mulder again,”  and ..””I find it hard to believe they’re keeping aliens from us because it’s pretty juicy. There are too many people, too many secrets to keep. It’s not human nature,” he said.”– David Duchovny

Wow  Tell that to Phil Schneider and the many whistleblowers out there (and on my channel) testifying at great personal risk to the truth about how we are not alone.  The show as it is currently construed needs desperate help… a whole new band of writers and dare we say it … a new set of stars.  For a show that once hit the zeitgist so accurately what a way to crash down.  No retreival possible.