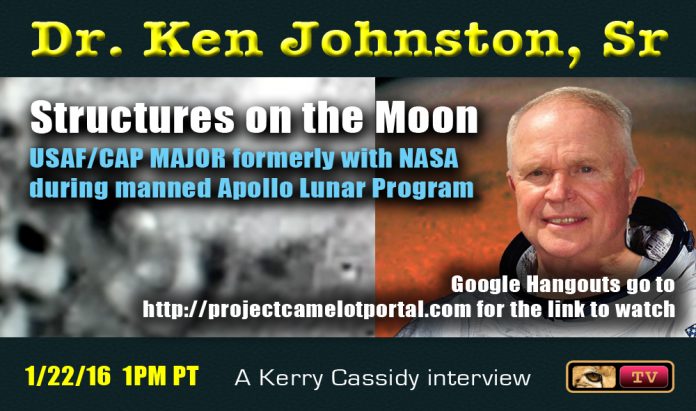 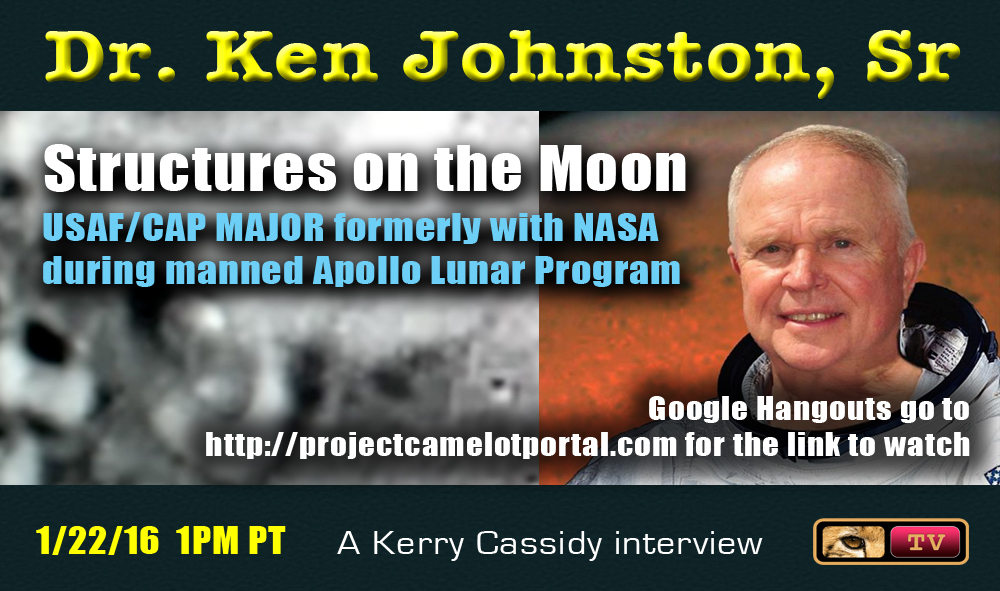 Website includes blog, audios, video and links to the books:

RE: Intro to Ken Johnston’s story, his Bio and information about the KEN’S MOON Book Series

INTRODUCTION TO THE STORY OF KEN JOHNSTON, NASA ARCHIVIST/WHISTLEBLOWER

Dr. R. Ken Johnston Sr., one of 4 Civilian Astronaut Consultant Pilots from the Apollo Moon Program, is a retired aerospace engineer, US Marine, and “NASA Whistleblower.” He refused to strictly follow orders and destroy a nearly-complete collection of 8″ x 10″ glossy photo-prints from the Apollo program, photos that are not available from NASA at this time and are of a higher resolution than what is generally found online in space agency databases. The story of Ken Johnston’s archive of historic NASA photos and his decision to go public with evidence of the manipulation of those images from the Apollo moon missions is the stuff of legend in the alternative history community.

The basic story is that Ken discovered a disturbing situation in the secret halls of our hallowed space agency. At the Lunar Receiving Laboratory (LRL), Ken was the Director of the Data and Photo Control Department, responsible for all the photographs taken by the astronauts during each mission and data generated by the contributing scientists from around the world. He also produced and edited the NASA Lunar Sample Information Catalog for each of the Lunar landing missions while he was at the LRL.

One day, Ken enters the room where he sees strange activity. Given that he feels a sense of responsibility for the integrity of the NASA collection, he inquires as to what is going on. He spoke with several people who called themselves “strippers” because they were stripping out details in lunar images that might be hard to explain. That day, they were at the task of painting out the stars in particular lunar images. The unusually lame excuse given was that the stars in the lunar sky would “confuse people.” This was alarming for Ken to discover. He found out also that “smudging out” anomalies on images was commonplace.

Ken’s story could be counted as a minority report in NASA’s branded panorama of American heroics. The US Government and the American people had allocated significant financial and other resources toward the goal of reaching the moon at the behest of our young President Kennedy. The idea was to see what was there, to share that information to the world, and elevate the knowledge of mankind. Ken’s discovery that the artifacts of that effort, might have been manipulated, was highly disappointing. It is this scenario being asserted by Ken Johnston, the very human being,  who at one time, had watch over the provenance of important historical photos.
Ken saved a set of photo prints that become “Ken’s Archive”, now a legendary legacy. Richard Hoagland, known popularly as “the Face on Mars Guy” a researcher of high caliber, meets up with Ken and both go forward in 1996 with a press conference at the National Press Club with other researchers and scientists to present the case, with photographic analysis, of anomalies on the moon and much more. Part of Ken’s story is in the book, “Dark Mission: The Secret History of NASA” by Richard C. Hoagland and Mike Bara.

In his autobiographical e-book, “KEN’S MOON – AN AUTOBIOGRAPHY – VOLUME I,” Ken is telling his own story, not wanting to revel in empty celebrity, he tells an authentic American story, growing up in Texas. Ken survives childhood and youth mishaps to rise to the level of a Civilian Astronaut Consultant Pilot in the ramp-up to the Apollo missions, only to be laid off along with 30,000 employees at Grumman alone, when we actually land on the moon. Ken is an eyewitness to history, to the inner workings of the moon mission machine, and to the manipulation of the NASA narrative and he wants to tell his perspective to set the record straight.

There is now a second e-book, 800+ pages with color photographs, “KEN’S MOON – A COMPLETE JOURNAL OF MISSION REPORTS FROM MERCURY TO COLUMBIA – FROM THE DR. KEN JOHNSTON SR. COLLECTION”  This volume in the “KEN’S MOON” series is a great resource for following most of the manned missions with scans of the reports describing the missions with much additional information, primarily photos. Many of the photos are from Ken’s collection, signed by astronauts who flew in those missions. The mission reports were issued right after each mission, “fresh off the presses” before the information was “spin doctored” at a later date. The “successful failure” mission of Apollo 13 shows the original intention of the mission and what actually happened. Ken’s story of how the engineering team saved days of data coming from the LTA-8 during the vacuum chamber tests, by creating a special tool showing “Innovation On Demand”. This was the kind of behind-the-scenes effort needed to keep the research and development on track, to “get to moon before the decade was out.”
—————–
KEN’S BIO

Dr. R. Ken Johnston, Sr. one of 4 Civilian Astronaut Consultant Pilots from the Apollo Moon Program, is a retired aerospace engineer, US Marine, and “NASA Whistleblower.” He refused to strictly follow orders and destroy a nearly-complete collection of 8″ x 10″ glossy photo-prints from the Apollo program, photos that are not available from NASA at this time and are of a higher resolution than what is found online.  Johnston was born at Fort Sam Houston US Army Air Base in San Antonio, TX. 1942, and studied at Oklahoma City University. He enlisted in the US Marines in August, 1962 and reported to Pensacola as a Marine Officer Cadet for flight training in September 1964. He left active duty from the Marines in August 1966.

Johnston was hired by Grumman Aircraft Corp. because of his training as a pilot with an avionics background to become a principal contractor for the Apollo Lunar Module testing. His duty was to assist with cockpit and instrument development and Astronaut training at the Manned Space Center (to be renamed JSC) in Houston, Texas, as a “civilian astronaut consultant pilot.” Ken Johnston worked as a contractor from 1966 to 1972, during the Apollo Program, and he was employed by Brown & Root Northroup, principal contractors to NASA for management of the Lunar Receiving Laboratory, where all the moon rocks were stored, curated, cataloged and in some cases, distributed to scientists who had successfully applied to carry out analysis in their own labs.

An important part of Johnston‘s duty was to provide photographic and peliminary analysis of the lunar samples to the contributing scientists from around the world.  The photographic documentation was to document the lunar samples exact location and orientation in situ. In addition to the photos he provided copies of the lunar sample information catalogs to the scientists.  As such, he had in his office several sets of photographs taken by Apollo astronauts with their chest-mounted Hasselblad cameras. When the lunar sample distribution wound down, he was instructed by Bud Laskawa, his boss, to destroy what remained of the photo archive, but Johnston kept one set as a personal collection for a work portfolio.

Johnston applied to NASA for the 1977 astronaut selection for duty as a Space Shuttle astronaut, but was turned down because NASA wanted the astronauts to be PhD level scientists. The ideal astronaut was no longer a “jet-jock”, but men with scientific accreditation. When NASA was recruiting again, Johnston re-applied, but was considered too old. He did, however, join NASA’s educational outreach program as a “Solar System Ambassador” traveling and speaking to civic and youth groups about space exploration and careers in engineering and science.

KEN’S MOON – AN AUTOBIOGRAPHY – VOLUME 1 – MY HUMAN EXPERIENCE
– THE “SMOKING GUN” THAT REVEALS THE “DARK MISSION” OF NASA
gum.co/kensmoon1

KEN’S MOON – A COMPLETE JOURNAL OF MISSION REPORTS FROM MERCURY TO COLUMBIA – FROM THE DR. KEN JOHNSTON SR. COLLECTION